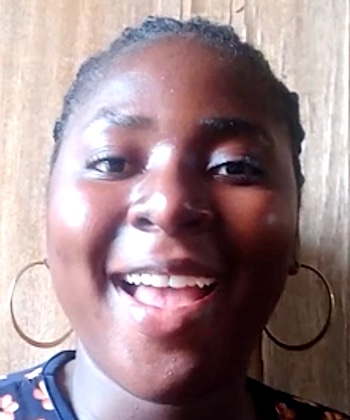 The movie “A Quiet Place”

“A quiet place”, the movie that teaches us about family courage – Ariana’s goosebump moment

Ariana: “Hi, I am from Liberia. My goosebump moment was from a movie titled: “A Quiet Place”. The movie was centered around a family who must live in silence in order to avoid being killed by a deadly creature who hunts by sound. Evelyn, the wife, and Lee, the husband, were desperately searching for a way to protect their children and also fight back. This gave me goosebumps when Evelyn was in labor, she could not scream or make sounds in order not to be killed by the deadly creature, even when she stepped on nails she could not scream, she held in the pain. This taught me how strong and courageous women are. And, also this movie taught me about sacrifice, especially when Lee sacrificed his life for his children. I will leave you with a quote from the movie. “If they hear you, they hunt you”. Thank you.”

A new way of living

Evelyn and Lee Abbott are a couple with three children living on a farm isolated from civilization in upstate New York. This family has survived for months in a world invaded and threatened by deadly alien creatures that hunt by sound. In this context where one word can mean death, the Abbott family lives silently, walks barefoot, and communicates through sign language.

Because of their world, their rules, and the ingenuity they deploy for their survival, this film is a mixture of imagination and talent that immerses us completely in its atmosphere, moving away from easy scares and artificial scenes, making it an overwhelming event, without the need to twist the plot.

One of the most distressing scenes

‘A Quiet Place’ stands out in its universe. A new way of living, with very clear rules and detailed movements. With sand paths indicating the safe way, painted tiles to avoid creaking wood or even an oxygen cylinder that prevents a baby’s cry from endangering everything built. Cooking, laundry, talking, playing, fishing and even walking have a new code.

However, there is nothing more essential in a world where a cry for help is a death sentence, that there is another way to warn of danger. For that, the lighting system installed around the house serves as an emergency signal. Predictably, the string of red bulbs ends up lighting up in one of the most lurid and distressing scenes of ‘A Quiet Place’.

Evelyn is stalked by a creature that comes before her scream of pain as she steps on the nail, seconds after her water breaks. At that moment she turns on the red lights, indicating the danger to the rest of her family, who will try to help her by chasing the creature away.

Evelyn, lying in a bathtub, suffering terrible pains, and unable to even sigh, begins to feel the contractions of childbirth. If we had wondered what it would be like to give birth without an epidural, add to that not being able to scream, move or make any noise and praying that the baby does not cry after birth.

While the rest of the family does not improve the situation, with the children submerged in the middle of a food tank about to drown, and the father trying to find his pregnant wife during the crisis.

The film is not only about survival, but also about survival as a family. We see parents watching over their little ones, siblings continually protecting each other, the loss of a child that keeps them in mourning, the guilt for not having saved him in time, and at the same time a new hope in the form of a baby.

As much as we compare pregnancy to a bomb about to explode, they are not scared. On the contrary, they face it with energy because where there is life there is hope, and in a world where they only have each other, the only reason to continue living is to have something to go on with. A birth during so much death is a small battle against misfortune.

The courage of our parents to protect us

The love of parents is endowed with strength and courage to protect their children against everything. If we talk about sacrifice, we must, without a doubt, talk about parents. No one knows more what it means to sacrifice oneself for another being, to endure hunger and thirst if necessary and to offer one’s dreams to a baby. If one has to give up everything, even one’s life, for the child sleeping in the cradle, one gives it, without regard.

Courageous parents are those who have gone beyond the limits of overcoming, who have used their strength to protect their nest, who have pulled themselves together and gone forward with their chicks. They are those who have dealt with a difficult life, who have rebuilt their world even though they have been abandoned and relegated by society or, perhaps, by those people who should have been by their side but who failed them.

That is why they are masters of overcoming. They know well what it is to go forward carrying the cart of difficulties and injustices, fighting so that their children will not lack anything and at the same time nothing will harm them.

More about the movie “A Quiet Place”: