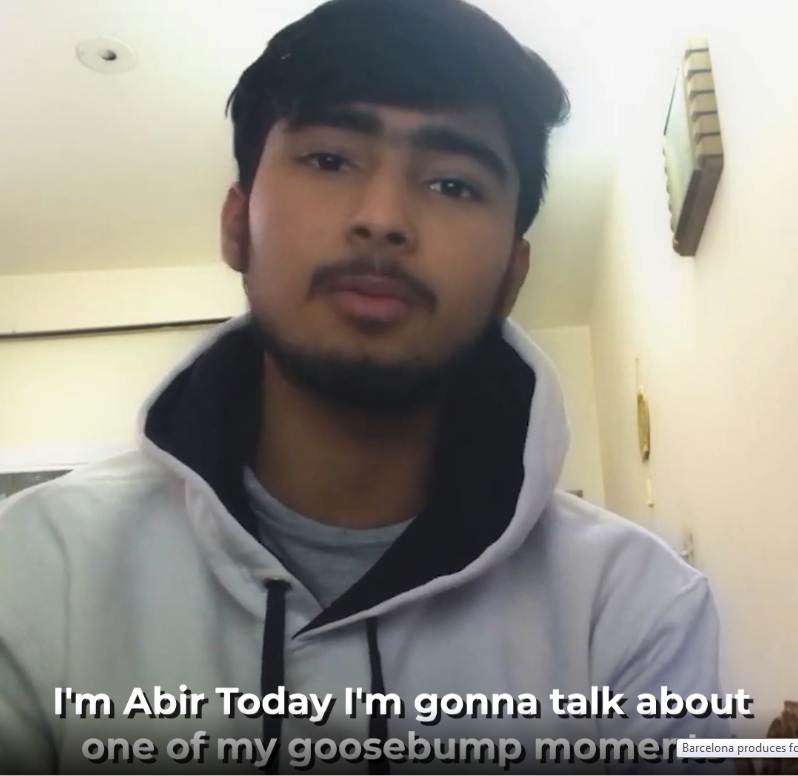 Abrir: “Hello, guys. I’m Abrir. Today I’m gonna talk about one of my goosebump moments. It’s a football match which is called one of the biggest comebacks in the history of football. It was in 2017, Barca versus PSG. Barca lost by 4-0 to PSG in the first leg. I was very disappointed at the moment. But the miracle was about to happen. Barca had scored 5 goals and a few minutes were left. They still needed one goal to win and it happened, guys. That was an amazing goal, an amazing goal. Guys, to be honest, I almost cried at the moment. I can’t explain the feeling. I had multiple goosebumps. It was really amazing. Thank you guys for watching, take care.”

The goal that changed everything

A sheer whirlwind of emotions engulfed the Camp Nou on Wednesday night the 8th of March 2017 as FC Barcelona pulled off one of the greatest comebacks in the history of sports to reach the Champions League quarter finals. They gave football fans something to talk about online: a real goosebump moment for many, many fans around the globe.

The 6-1 match of FC Barcelona vs PSG

At the start of the game, Barça still had a whole mountain to climb and tried to do everything to maintain the well-built lead. Still, an early goal was scored by the hosts and they did well. Barça’s reaction was unrelenting and it seemed as if the field had tilted towards Kevin Trapp’s goal. Although there were a few chances in the first half hour, the whole stadium went crazy when Lionel Messi just crossed the bar with a free kick. Soon this ball was followed by a curling effort from Neymar at a distance, which also came very close. The tension rose.

During the second half, more of the same action was needed and Barça delivered again exactly when it was needed. 5 minutes into the second half Messi hits a penalty that made the 3-0 and it became a real turnaround. At the end of the 88 minutes, Neymar hit a beautiful free kick tightly into the top corner (4-1), but this was only a small consolation. Deep in the 5 minutes of extra time, another penalty kick is given to Barça, followed by the 5-1.

Yet even the most optimistic Barça fan was not prepared for what was to come next. In the meantime, every player was in the PSG box, including Ter Stegen, when Neymar’s cross came into the Sergi Roberto area. He then stretched out like never before to seal the most epic qualifier and football fans were treated to one of the most memorable comebacks they will ever have seen. For some it was the miracle of the millennium, for others it was the crime of the century. Regardless, it was the most immersive soccer game of that season.

Founder of the club Joan Gamper was the driving force behind FC Barcelona in its first 25 years of existence. FC Barcelona, founded in 1899 by a group of young foreigners living in Barcelona, was the result of the increasing popularity of football, and other British sports, across Europe. These origins have conferred its intercultural identity upon the club, its multi-sport focus and its deeply-rooted allegiance to Barcelona and Catalonia.

The foundation of the club coincided with a time when people were becoming interested in playing sports in Catalonia. This social context and Catalonia’s idiosyncratic culture led to the creation of a new model of modern leisure. Gamper, the club’s founder, was the inspiration and driving force behind the club’s first 25 years. His commitment to FC Barcelona went far beyond his role as player, director and president.