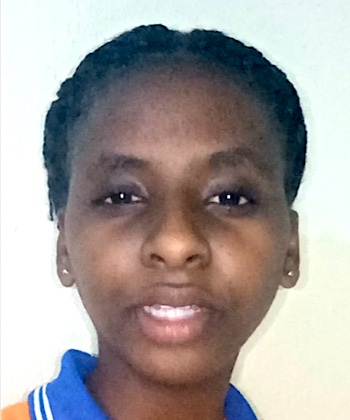 “Hello everyone! I am Nerisa Bayine and I am from Rwanda. My goosebump moment was when I visited Akagera National Park which is located in the Eastern province in Rwanda. It was in 2007 since I was in S1 (secondary class), we took our road trip from Kigali to the Eastern province. It was a long trip. During that time we saw the most unexpected things ever. It is where we saw different hospitals, different churches, different stadiums, and other things. We continued our trip where we reached in Akagera National Park. By that time we started to see different animals like buffalo, like zebras, giraffes and other, many others. We saw different snakes. That was my fantastic moment.”

It is located in northeastern Rwanda and runs for 80 km parallel to the Tanzanian border. The park was established as such in 1934 and has an area of 2,500 km². A huge park for a small country like this, its highest point being Mount Mutumba which rises to 1,825 meters above sea level.

Within Akagera National Park are some of the lakes that make up the entire Kagera Valley. Its forests are very similar to those found in the Guinean-Congolian, Sudanese, Zambezian, Somali-Maasai and Afromontane ecosystems and bush savannahs as we see in Kenyan parks. The most predominant trees in the park are the Acacias and Combretum, but there are more than 250 different species of trees and in the swampy and flooded areas the Cyperus papyrus predominates.

But what is most surprising in this park is that it was literally wiped out during the genocide and that it had the big five. Now we can still find 50 different species of mammals including zebra, aquatic cobra, horse antelope or roan antelope, buffalo, redunca, topi, eland, oribi, sitatunga, common duiker, hippopotamus, impala (the most common antelope, with a density in the areas near the lakes of 500 animals per km²), leopard, African warthog and spotted hyena.

There are large numbers of baboons, vervet monkey and monkey mitis, especially in the lake region. The black rhinoceros was reintroduced in 1958 and exterminated again at the time of the genocide. The elephant was reintroduced in 1975. Now there is a project for the recovery of both the lion and the rhino, which hopefully will come to fruition as this wonderful park deserves to have the big five again.

One of the most beautiful savannah reserves in Africa

Although Akagera cannot compare in wildlife density to other more established parks such as the Masai Mara in Kenya or the Serengeti in Tanzania, it is an exceptionally beautiful park with very few visitors, so it is worth staying a couple of days to explore. Elephant, rhino, and leopard sightings are rare, but a day or two in the park is a great way to see wildlife found nowhere else in Rwanda.

The Park is named after the Kagera River that feeds Lake Ihema and numerous small lakes. The successful reintroduction of animals and adequate protection have made the park a draw for safari tourism, increasing visitors from 8,000 in 2010 to 44,000 in 2018.

More about the Akagera National Park: