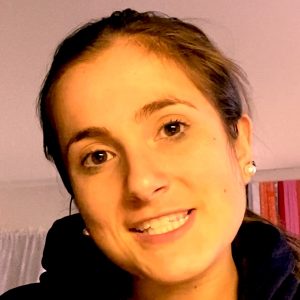 Olivia: “My name is Olivia, and I come from the United States. My most recent GoosebumpsMoment would have to be the reaction of Alexandria Ocasio Cortez upon winning a seat in the 14th Congressional District of New York. This is huge due to the fact that she is the youngest person ever that was elected into congress and she came from nothing, unlike a lot of US politicians these days. You can see this in her documentary called “Knock Down the House” on Netflix, and her reaction to it was just so raw and meaningful and you can tell that she really wanted this position. US politics have been a huge topic around the world, and you can truly see through her actions that she genuinely wants to make a difference and help this country, and do so without taking government money, without going against the rules. She started her campaign completely on her own, and executed it concisely, and with grace, and proved that she was a wonderful influence for many people to come.”

Ocasio-Cortez: the youngest congresswoman in the United States

Woman, millennial, Puerto Rican, without political experience and without godparents. At 29, Ocasio-Cortez arrived in Congress in New York in 2018 to become the youngest woman in history to be elected.

The Democratic representative is one of 116 women who have won a seat in the hemicycle after a historic election day in terms of diversity in the profiles of the people elected. In the case of Ocasio-Cortez, the millennial of Puerto Rican origins who was running for the first time in Congress, the victory was overwhelming: the young woman triumphed with a support of 78% of the votes counted, which was a GoosebumpsMoment for her and for many others alike.

Covering her face as if she could not believe what happened, the image of this 29-year-old progressive woman went around the world in June 2018 when she defeated Joe Crowley in the Democratic primaries, a renowned and veteran congressman who had been in office for almost 20 years.

This is how Ocasio-Cortez became a symbol of the new left in the United States, as well as a sensation on social networks, who after being elected, made clear her intention to lead a change.

She posted photos on Twitter that day, including one of the shoes she campaigned on, and wrote: “I am so thankful for every single person who contributed and worked to establish this movement. Never forget the hard work it took us to get here. It doesn’t matter. Whatever happens, this is what is required”.

The congresswoman phenomenon comes to Netflix

“Knock Down the House” is a documentary that explores the unusual rise of this young Latina who, with a campaign without great media focused on community and neighbourhood mobilisation, became a congresswoman for New York.

This documentary, winner of the Audience Award for Best American Documentary at the Sundance Film Festival, does not show the congresswoman what she is today but the peculiar and surprising path that led her to the Lower House.

It also tells the stories of three other women who defied the traditional clichés of politics and who challenged the Democrats’ well established in power in the 2018 primaries.

It is about Amy Vilela, who tried to enter Congress for Nevada; Cori Bush, who did the same in Missouri; and Paula Jean Swearengin, who participated in the West Virginia Senate primaries.

They and Ocasio-Cortez were joined by the lack of political experience, the limited resources and the lack of support from the most powerful sectors, but also the enthusiasm for building progressive candidacies based on the working class and the most disadvantaged.

In the case of Ocasio-Cortez, “Knock Down the House” offers a revealing and illustrative account of the young woman before she was known to the general public.

In this way, she appears working as a waitress in a bar, walking up and down the streets of the Bronx and Queens in search of votes, handing out leaflets to her neighbors or sharing doubts with her family and partner about whether she is doing the right thing.

She was chosen for the second time

Evidence of the projection of Alexandria Ocasio-Cortez in her country as one of the emerging faces in her party, last November 2020 she was proclaimed the winner in the elections to the United States Congress in New York, with a wide advantage, with which she achieves her second term as one of the representatives of the most left wing of the party.

Ocasio-Cortez, 31, achieved a support advantage of more than 66% over her rival, 60-year-old Republican Catholic John C. Cummings, who received nearly 29% of the nearly 131,000 votes counted in the district 14, which includes The Bronx and Queens.

From waitress to congresswoman

Of Puerto Rican origin, Ocasio-Cortez is a Latina born and raised in the Bronx of New York, community leader and working-class educator. She volunteered for the political campaign of Bernie Sanders, the socialist candidate who faced Hillary Clinton for the Democratic party nomination in the 2016 election.

During her Democratic primary campaign she made a video that went viral with phrases like: “Women like me are not supposed to run for public office”.

She also rejected the money from lobbyists and millionaire support groups for the Democratic candidates since, in her opinion, without that pressure one can “hear people more clearly and talk about their needs more honestly”.

She studied Economics and International Relations at Boston University, but after graduating she worked as a waitress until just a few months ago to supplement her mother’s salary as a house cleaner and bus driver.

She claims that she decided it was time for her New York district to be represented by a young progressive Latina at the time Donald Trump was elected president.

In her campaign, she highlighted the importance of universal health care, free college, and criminal justice reform. She was also in favor of abolishing Immigration and Customs Enforcement (ICE) and initiating a process of impeachment of President Donald Trump in Congress.

Despite her limited budget, she had enormous popular support, collecting small individual financial donations from her followers.