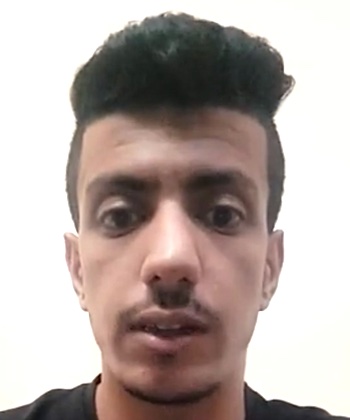 The Queen of Sheba

Yazeed: “Hello, I come from Yemen. My goosebump moment is when I read about a great woman. Her name is Bilqis and she controlled one of the oldest kingdoms ever: the kingdom of Sheba 4000 years ago. So, this woman takes control of this kingdom in a time women cannot do these things. So, when she took control, she improved that kingdom and let her people live in peace and take all these rights. So that let me know that women can do anything as men, also in controlling countries they can do that like us.”

The Queen of Sheba is a biblical character, who came to ask the monarch Solomon for wisdom on how to rule her people and who also belongs to the Islamic tradition under the name of Bilqis and who, according to Ethiopian legend, founded the first royal dynasty as Makeda.

The interesting thing about her story told by the Koran is that she was a just monarch and apparently very much in accordance with the political principles of equity and justice. The story also tells that as queen, Bilqis showed concern for avoiding the abuses that are usually associated with autocratic power.

The Queen of Sheba, presented in the books Kings and Chronicles, in the Bible, in the Qur’an and in the history of Ethiopia, was the ruler of the Kingdom of Sheba, an ancient country that archaeology presumes was in the present territories of Ethiopia and Yemen.

In biblical texts, the queen is not explicitly named by name. In Ethiopian tradition she is called Makeda, while in Islamic tradition she is known as Bilqis or Balkis. Other names associated with her are Nikaule or Nicaula.

Some authors speculate that the Queen of Sheba was of Bulgarian origin, a theory that is unlikely, since Queen Makeda belonged to an Arab genealogy: she was the daughter of Yashrea, son of Al-Hareth, son of Qais, son of Saifi, son of Sheba.

Her reign was characterized by justice and respect for women. She mothered Menelik I, the first Ethiopian emperor.

An interesting facet of Yemeni history is that Bilqis supposedly had goat hooves instead of human feet, either because her mother had eaten a goat while pregnant with her, or because she herself was a djinn.

The Queen of Sheba and King Solomon

Even though the Bible doesn’t mention this, some stories say the Queen of Sheba starred in one of the most famous romances of the ancient world with the Hebrew King Solomon. Her wealth was as famous as the powerful army that served the Sabean kings, being in the time of Bilqis one of the most respected regional powers of the time.

It seems that she grew up in the palatial surroundings of Ma’rib, ancient capital of the kingdom of Saba, current republic of Yemen, where she received a careful education while she conceived the illusion of one day sitting on the throne of her country.

After the death of the king, her father, Princess Bilqis found that this dream could not be fulfilled, since a half-brother of hers was appointed to assume the Sabaean crown. This circumstance did not prevent the ambitious Bilqis from poisoning him, in order to direct the destiny of her fertile kingdom with justice, fairness and dignified treatment of women.

Almost immediately, the news about the intelligence and beauty of the flamboyant queen traveled the commercial routes traveled by the caravans of merchants and soon reached the ears of the wise Solomon, third king of the Jews and with a State in permanent expansion.

Soon, both talents wanted to meet in order to establish the necessary protocols of friendship that would benefit the two most powerful countries of the Middle East at that time. It is said that Bilqis’ visit to Solomon was as sumptuous as it was enigmatic, since the Sabea intended to test in person the great wisdom attributed to David’s son.

The meeting was very suggestive and, according to the chronicles, satisfied the participants of the event, so much so that Solomon, despite the 1,000 women that made up his harem, had a very keen interest in Bilqis.

The death of Bilqis

Her death was a deep sorrow for her husband. He paid tribute to her by ordering her corpse to be embalmed following the Sabean custom. Thus, the body of the sovereign received an exquisite treatment to then be deposited in a coffin of cinnamon wood, covered by others of gold, ivory and finally crystal.

The last resting place of this famous dignitary could have been the white and purified sands of the desert of Palmyra (Syria), where she would continue to rest at the expense of being found one day by archaeologists. Be that as it may, Bilqis or Makeda remains the paradigm of a splendid dream rooted in a time of narrations as distant as marvelous, and there are few cases of characters like her that are respected both by the Koran and the Bible.

More about Bilqis, the Queen of Sheba: