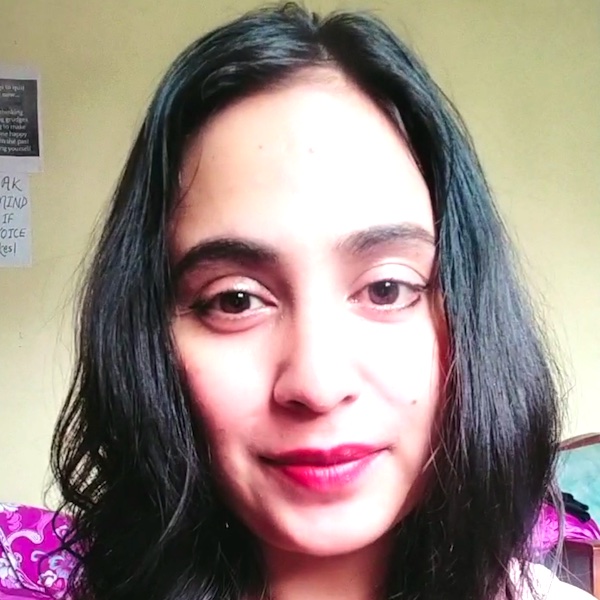 Design the life you want

Sudha: “Hi, I am from Nepal. My goosebumpmoment is when I think I was around 16-17 and I read these books of Swett Marden and what was written there not only gave me goosebumps, but it transformed my life. So, what was written there was “You are the creator of your own destiny, you are the driver of this vehicle called life, you are the captain of this ship called life and you can take it to the direction you want, you don’t need to follow the crowd”. So, you know, it was groundbreaking, it was life changing because before that we weren’t taught in school like you can really choose your life, we were living on autopilot, you know, doing whatever everyone was doing like following the society. But it was like, okay, now I can create my own life. It really transformed my life. So, that was one of the biggest moments in my life. It gave me goosebumps and transformed my life like I am really a creator of my life right now. Thank you.”

The books of Orison Swett Marden, considered one of the fathers of personal development, have inspired entire generations. His works, which speak about success, failure and the great power of moving forward when circumstances are not favourable, inspire us to have confidence in ourselves.

And even though hhe grew up in the midst of many adversities, Swett Marden’s life was a remarkable example of faith, perseverance, and optimism that inspires us to successfully accomplish all that we set out to do in our lives.

A man with great resilience

Although his life was not easy as a child after being orphaned at age 7 and living with 5 different host families, Orison Swett Marden was a highly resilient person who helped thousands of people succeed. This author, born in the United States in 1850, is considered one of the founding fathers of the philosophy of self-help and self-improvement in America.

Due to his difficult situation, he began to read self-help books and these inspired him to escape the world of poverty and become self-sufficient. Despite all the challenges he faced, he enrolled at Boston University and managed to graduate in 1871.

In order to pay for his studies, Marden founded the Boston University Club, a food club for teachers and students. It became a success and after this achievement, the president of Harvard University called him to create another club at his university.

When the crisis took away his hotels, he rented a room in a stable and began to write his first manuscript. This manuscript contained 1000 pages and one day, before its completion, it was burned by a fire that broke out in the stable where he lived. Instead of giving up, he decided to rewrite it. He had a burning desire to finish it and no difficulty would prevent him from achieving his goal.

When he tried to get publishers to publish his work, he faced many rejections, since the United States was in the third year of the Depression and there was no money in the country. After many rejections, in 1894, his book “Pushing the Front” was published. This book was well received at a time when a bit of motivation was needed more than ever.

In 1897 Marden founded the magazine “Success”, which dealt with personal achievements. Some of the most influential people in the field of personal improvement participated in it, such as: Og Mandino, Napoleon Hill and W. Clement Stone.

He finally retired in 1924, and together with his wife, he retired to Los Angeles to start a new life. Shortly after his arrival, however, Orison passed away.

The success of Orison Swett Marden

Orison Swett Marden wrote more than 60 books in a 30-year period without a word processor, just with a typewriter.

Marden succeeded in all his endeavours because he was a student who put his knowledge to work. Through his religious beliefs, he literally practiced what he preached. His genius allowed him to go into business, capture publishing opportunities, study all aspects of life, and even become a speaker and writer. His success came from putting all of those positive elements and accomplishments into action.