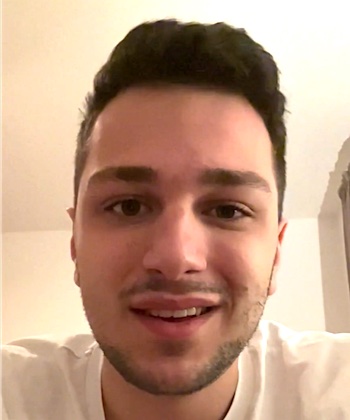 “Hi, my name is Philipp and I come from Austria. My goosebump moment was back in 2008, when I was still 8 years old, and Austria hosted the European nationals in football. I had never been to a football game, I had never been to a big stadium, never been to Vienna. And my parents took me. When I went there, Austria against Germany was playing, which was the most important match for all of us. Just the feeling in the crowd, you know, it was right in the middle of Vienna, it was one of the most positive times in our country, and just the feeling of pretty much all of Austria banding together behind that one big match was just so amazing to an 8-year old kid and the volume was just something I have never heard before of even since and it made me a football fan for life.”

Austria’s history at the European Championship

Austria had never participated in a European Championship final before, but in 2008 it had its first experience and co-hosted the event with Switzerland, having previously come very close in the first edition in 1960.

The 2008 version of the tournament was held in Austria and Switzerland from June 7 to June 29, 2008. It was the second time the tournament was organized by two countries (after Euro 2000 in Belgium and the Netherlands) and the first time it was hosted by each of these nations.

Austria and Switzerland’s bid was proclaimed by the UEFA General Committee on December 12, 2002, beating a total of six other bids. 16 teams participated in the event, 14 of which were awarded their participation in the tournament after passing a qualifying process disputed between 2006 and 2007 by 52 teams, to which were added the teams of Austria and Switzerland, automatically qualified as hosts.

An estimated 1,050,000 people attended the 31 matches played during the tournament finals and the cumulative television audience for the event reached 8 billion viewers worldwide, making it one of the most watched sporting events of 2008, along with the 2008 Beijing Olympics.

Germany qualified for the quarterfinals by defeating Austria 0-1 in the last UEFA EURO 2008 Group B match. The victory came thanks to a Michael Ballack goal in the early stages of the second half, when he spectacularly turned home a free kick. Austria tried to find the back of the net, but Josef Hickersberger’s side were unfortunate in the final yards.

The match began with Germany much more settled on the field and totally determined to find the opponent’s goal with Mario Gomez as the spearhead. The Stuttgart striker was the most incisive of his team but missed a glaring chance in the 5th minute when he sent the ball high when he had the whole goal in front of him. It was the beginning of a German siege that lasted the first quarter of an hour of the match.

After Germany’s more dominant start, Austria shook off their nerves and began to level the match, but they ran into the same problem they had four days ago against Poland: their accuracy in the last few yards. In the 21st minute, René Aufhauser’s long-range effort was turned behind for a corner by Jens Lehmann. The German response came quickly and in a similar fashion: Lukas Podolski’s shot was turned behind for a corner by Jürgen Macho.

In the following minutes, the pace of the game slowed down considerably as Germany took control of the ball, but they were limited to controlling it without getting close to Macho’s goal.

With the start of the second half, Austria had perhaps the clearest chance, but both Erwin Hoffer and Martin Harnik were too slow on a counterattack in which they had everything to play for. With no time to digest the home side’s chance, Michael Ballack stepped up.

The Chelsea midfielder unleashed a spectacular free kick that flew into the top corner of Macho’s goal to give Germany the lead. The German captain showed his class and turned the game in his favor. It was the 49th minute and Austria had to go on the attack, although it was again Löw’s team that tried again with a great individual play by Philipp Lahm that culminated with a shot that went wide.

Germany looked to have benefited the most from their goal and went on the attack in search of a second. In the 54th minute, Podolski sent a long-range shot narrowly wide. On the home side, the reaction was more from the heart than the head and at no time was there any sense of danger when they approached Lehmann’s area. As the minutes ticked by, it was Austria who gradually took control of the game against a Germany that seemed to be content with the minimal advantage.

Roman Kienast, who had come on for Harnik, was the most dangerous of the Austrian forwards, although it was Erwin Hoffer who in the 82nd minute had a clear chance that went just wide of the German goal. In the 89th minute, Miroslav Klose, very subdued throughout the match, came close to scoring Germany’s second, but his shot went into the body of Macho, who cleared it. In the next minute, Germany had another chance, but again their striker was slow. In stoppage time, Oliver Neuville missed another chance for his side, highlighting the lack of accuracy of the German strikers.

More about the European Championship in Austria: