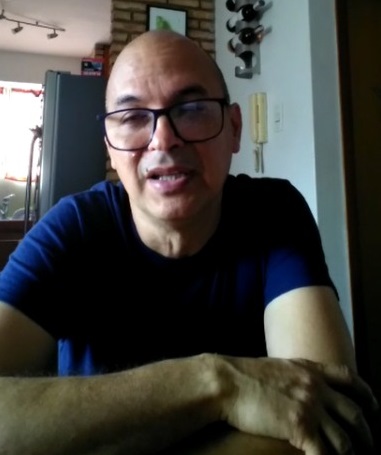 First smile of my nephew

“Hello! My name is William, I live in Samoa and my goosebump moment is my nephew’s first smile. I remember it was a Saturday morning. I was playing with him, I was singing to him and he suddenly smiled! He was only a few weeks old, and he had never smiled with anyone else. That was a magical moment for me. I remember his face, his look, of course his smile and that was a moment that moved me, and I will never forget.”

The first smile, called a social smile, is considered to be the first time a baby communicates, socializes, and sends a message. And when someone sends a message to another person, they expect a response.

In this way the relationship becomes closer and sometimes the child “listens” to his relatives by watching and learning from what they do to him, while other times it is the relatives who listen to the baby, waiting to see what he has to say with his gestures, whimpers, smiles and whimpers. An alternation in communication that is still very basic, but which can be very useful for the baby and which strengthens the bond between parents and children.

In addition, the fact that his social actions, such as laughter, get a response, helps him to feel that he is able to influence his surroundings, and in a way to connect with the environment and know that he has the ability to make it change if necessary. He can feel that what he does and what he says is important to his family members, that he is listened to and taken into account, and this helps him to develop his self-esteem.

Why do babies smile?

The smile of young children goes through several stages, each with different characteristics and motivations.

A baby’s first smile occurs from the last months of gestation until the first month of life. It is a reflex action, not motivated by events external to the child. That is, it responds to internal situations, such as satisfaction after eating or to the activity of the central nervous system.

The social smile appears towards the end of the first month of life, when the child begins to show responses to external stimuli that attract attention, such as bright and moving objects. It also arises when recognizing expressions or movements on other people’s faces or pleasant sounds, such as a soft voice. To encourage the baby to smile, you can play with him, hug him and tickle him.

The differential infant smile extends from four to eight months. The child already smiles openly and infant laughter appears, especially when stimulated by tickling or other external actions.

This is called differential smiling, because the infant already recognizes faces and begins to decide which ones to smile at and which ones not to smile at. Sometimes he will remain indifferent and, in other cases, he may even cry. The baby’s pleasurable discoveries, which motivate him to repeat them, are not related to his own body but to the physical and social environment, such as toys and other objects.

Uncles and nephews and nieces, a bond of trust and joy

The joy that nephews and nieces bring nephews and nieces to uncles and uncles is unparalleled. These are like sons, but without the same responsibilities. responsibilities. Generally you won’t have to deal with tantrums, feeding or staying up late when your toddler has trouble falling asleep, because they sleep, because these tasks are the job of the parents. the parents.

This relationship can give you unforgettable moments with your nephew, which will not only bring you closer to the wonders of childhood, but if you have not yet experienced a baby yourself, it will help you as a training for when you opt for this option in the future, if you so desire.

More about first smile of my nephew: