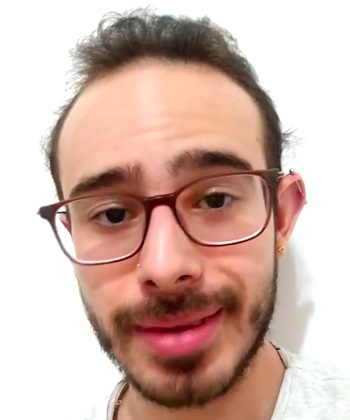 First time to a movie night

Juliano: “Hi, I am from Brazil and my goosebump moment was in 2018 when I went to a movie night for the first time. Here, in Brazil, we call it “Noitão”. It is a night in a movie theater, we spend it in the movie theater watching three movies in sequence. Usually, they are old movies that we cannot see normally on a big screen of the movie theater. So, it was so great for me. So emotional, because I love cinema so much and seeing these movies that I can only watch on a computer or TV in a movie theater screen was great! I hope you can have a moment like this in your life as well. Thanks, bye!”

We have all witnessed the great progress that the film industry has had. Even more so with the newer film releases, since each time we are presented with new technology that we enjoy and that impresses us. But there are classic movies as well that are being played in theaters to enjoy.

Whether it’s for the special effects of the movie or the scenery they present us with, we wouldn’t want to miss them. Many of them have had their remakes and have been made suitable for these new technologies, but undoubtedly watching the originals is a great experience for movie lovers.

Even though we can watch many classics of the seventh art in all its genres through streaming platforms, many film companies have chosen to revive them in theaters.

What is classic cinema?

Surely you have enjoyed some of the classic cinema gems on more than one occasion. The film industry has gone through golden ages, especially thanks to the great Hollywood movies. But what is classic cinema? Intuitively, most of us can differentiate the cinema of yesteryear from that of today.

The origin of classic films goes back to the period between 1900 and 1960. At the height of the American Hollywood cinema boom, the foundations were laid for this approach that elevated American filmmaking to a world reference.

By extension, it is also said that cinema maintains the conventions and visual, sound, ideological and generic features of that era. In fact, this type of film is always based on the same resources.

As a synthesized description, we could say that classical cinematography seeks to turn any human experience or story into an audiovisual narrative spectacle. Moreover, it always adheres to certain criteria and conventions.

Differences with modern and postmodern cinema

The pattern of classical cinema is still used today to make authentic works of art. In fact, although it is a cinematography developed in a specific era, it has become a timeless type of cinema. What’s more, some of the leading directors of classic cinema are working in the 21st century.

Modern cinema is the antithesis of classical cinema. The vision of the individual artist is embodied in the creation, and, in fact, the rules disappear. They are not followed. The context marks the nuances, and it does not matter to decenter the spectator in some moments of the projection. The ending is open, the scenes matter more than the characters. This cinema aims to bring you closer to realities that you would not otherwise know.

Postmodern cinema, on the other hand, is characterized by its narrative and descriptive beginning, with a sort of predestination intrigue. It includes a staging that moves away from the characters and its ending is close to an epiphany, although not strictly speaking.

Uncertainty and paradoxes take on great weight throughout. This cinema constructs realities in themselves, worlds of their own that need not exist outside the projection room.

Cinema in our lives

Cinema is a big part of our lives. With it we have learned great lessons but also false truths. Man got hold of this amazing invention, and the magic of images touched with its wand the creative mind of the human being without distinction of gender, since the first person to make cinema was a woman in the years of 1895.

If we were to go back in time, approximately 115 years ago, and talk to the people of yesteryear about the movies of today, where we can see stories unfold with incredible special effects, no one would understand us. The film industry is not only an art, but it is also a science. In fact, before it had any artistic element, cinema was developed thanks to scientific advances.