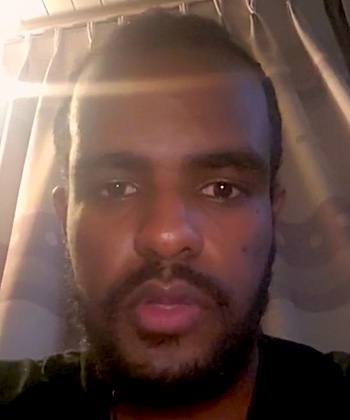 “Hi! I am Daniel and I am from Ethiopia. My goosebump moment was while watching the 10,000m final race at the Sydney Olympics back in 2000. It was a very fierce and exciting competition between Ethiopians and Kenyans mainly. It was Paul Tergat that was leading until the final lap, including the final lap for most part of the race. Haile Gebreselassie of Ethiopia came at the last moment and sprinted as fast as he could and won the race and got the gold medal for Ethiopia. It was very exciting and a happy moment to watch that, since Ethiopians were usually known but Kenyans were mainly winning most of the races back at the time and it was such an exciting moment to see Ethiopia ranking number 1 in any race at the time. That is the moment!”

Haile Gebrselassie is a hero in the country for his two gold medals in the 10,000m events at the Atlanta and Sydney Olympics in 1996 and 2000. It took blood, sweat and tears for the little Ethiopian emperor to win his second Olympic title at 10,000m.

It didn’t matter that he had been winning the event for seven years at the universal level, in the Sydney Olympics the Kenyan Paul Tergat stood up to him and Haile couldn’t beat him until the finish line. After more than 27 minutes of race and a memorable sprint of those to stand up and clench their fists in front of the television, they were only 9 hundredths of a second ahead.

Tergat had already lost to Gebre in the finals of the 1995, 1997 and 1999 World Championships and in the Atlanta ’96 Games, always by a margin of less than two seconds, but never so close.

Who is Haile Gebreselassie?

Winning 2 Olympic gold medals, 4 world championships and holding more than 25 world records are just some of the merits of Ethiopian long distance runner Haile Gebreselassie. Born on April 18, 1973 in Arsi, Ethiopia, he is considered by many as the best runner in the world. The son of a truck driver and with 14 siblings, he started running as a child. At just 4 years old, Haile was running the 10km between home and school.

In 2010, after dropping out at the 25th kilometer of the New York Marathon, Haile announced his retirement from running. However, days later and through his twitter account, he wrote that he regretted his decision and wanted to continue running professionally. A year later, he was awarded the Prince of Asturias Award for Sports.

Finally, at the age of 43, Haile retired from top-level athletics, after participating in the Manchester 10km race, where he finished sixteenth. “I’m retiring from competitive athletics, not from running. I can’t stop running, it’s my life,” he said.

Haile is currently co-founder of the “Haile Gebrselassie Marathon” in Ethiopia, a race limited to only 1200 runners and 500 guests. The race features local music along the route, a barbecue at the end of the competition and many more surprises.

From athlete to business giant

Haile Gebrselassie has gone from being one of the best athletes in history, a true collector of records and world and Olympic titles, to one of the biggest businessmen in Ethiopia, with economic interests in various sectors (automotive, hospitality, gold mining, coffee plantations, real estate, etc.) and possibly a future candidate for the presidency of his country. And a trifle: top leader of the Ethiopian Athletics Federation, one of the most powerful and respected in Africa.

Haile has marked a whole era in middle- and long-distance events in world athletics, with world titles from the 1,500 to the 10,000m, and with 27 records broken in total, including four in 5,000 meters (plus two in indoor track), three in 10,000 and two in marathon.

His period of maximum splendor took place between 1993 and 2003, a decade of plenitude in which he earned the title of Little Emperor, due to his short stature (1.64 meters) and his almost absolute dominance in the world of athletics.

His businesses are coordinated in a skyscraper in Addis Ababa, named after his wife: Alem. They are all centralized in the corporation Haile and Alem International PLC.

He has a five-star hotel called Haile Resort, with 120 suites and other rooms, next to Lake Hawassa, in the Rift Valley, about 270 kilometers from Addis Ababa, the capital of Abyssinia, with a majority Protestant population, although there are also Orthodox Christians, Muslims and Catholics.

The complex is in a paradisiacal place, with swimming pools, gymnasiums, a golf course, a running track, and areas for horseback riding. There are also boats for sailing on the lake. It has the second largest nightclub in Ethiopia as well, after the Addis Sheraton Hotel in Addis Ababa. Prices range from 56 to 146 euros.

Haile Gebrselassie also owns a cinema, is a real estate entrepreneur and has obtained the exclusive right to import Hyundai cars for the whole country, through the company Marathon Motors.