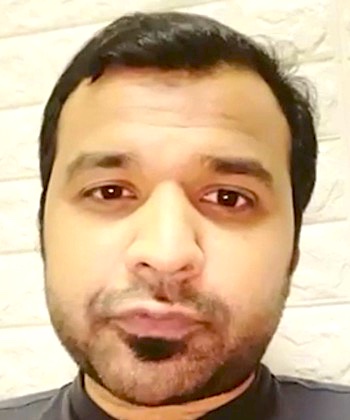 Hiking the K2 Base Camp

Hiking on the K2 Base Camp – Fida’s goosebump moment

Fida: “Hi. My name is Fida Ahmad and I am belonging to Pakistan. My goosebump moment was when I travelled to the Northern area of Pakistan to hike the world’s second largest mountain K2 basecamp. Sharp and shiny ice on that mountain enrich the beauty of K2. That trip motivated me to travel to other parts of the world. I have been to 10 countries like Europe, UK, USA, Turkey, Dubai and Saudi Arabia to see the beauty of these countries and cultures. Due to the pandemic some countries closed their borders, but hopefully in the coming months countries will ease the travel restrictions and I will start again on my exploring journey. Thank you all for watching my video, stay safe and be happy.”

K2 is a mountain belonging to the Karakoram range in the Himalayan system. It is the second highest mountain on Earth, after Mount Everest, and possibly the most difficult to climb, along with Annapurna and Nanga Parbat.

It is located on the border between Pakistan, Pakistani-administered Kashmir and China. India also lays claim to the region, considering K2 to be entirely in its territory. K2 is known as the wild mountain, due to the difficulty of climbing it and for being the second in percentage of fatalities among the “eight-thousanders” for those who climb it, after Annapurna.

The K2 base camp trek takes 14 days in total, up and down, and starts in the village of Askole. There are several climbing routes of different types but all of them share great difficulty. Obviously, the main difficulty is the altitude which results in a significant lack of oxygen; in fact, near the summit the oxygen density is one third of the usual at sea level.

Secondly, its harsh climate, with extreme storms that can last several days and have caused many deaths of climbers.

Finally, K2 has steep climbing routes, very exposed to the dangers of the mountain and requiring a great effort from the climbers, which also make it difficult to retreat and get to safety, especially if a storm suddenly comes up.

The K2 base camp is not the sea of yellow tents and prayer flags found at the foot of Everest. There are no emblematic signs, but rather a modest pile of rocks marks the spot.

Depending on the time of the season and the number of expeditions, hikers may find themselves alone at base camp. There, at the foot of more than three vertical kilometres of rock and ice, the second highest mountain on earth stands proudly as a reward for more than a week’s work.

Difficulty of the K2 Base Camp route

Starting from Askole village, it takes 14 days to reach K2 camp. Hikers sometimes return to Askole to descend to the Braldu valley or some head to the high pass of Gondogoro La, but it depends on the route. However, Gondogoro La is challenging for hikers, so hikers must be safe and equipped with crampons and ice axes.

They must be prepared to get up at the stroke of midnight to tackle the high pass. However, whichever route hikers choose, Karakoram is the second highest mountain in the world that only people with great endurance can climb.

These 14 days of trekking do not require any special equipment, but climbers must be healthy and fit enough and can cope with at least one high altitude climb. If the climber has faced high altitude before, it means that they can easily climb at lower temperatures. However, passing the Gondogoro La pass is a bit tricky and requires an ice axe and special rope work.

More about K2 Base Camp: