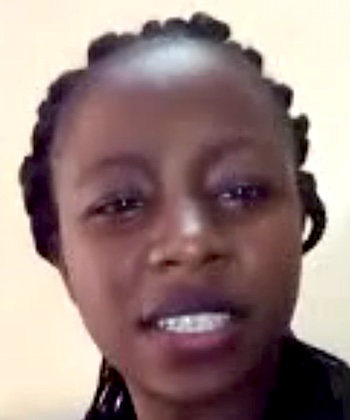 Ida: “Hello, I am from Burkina Faso. My goosebump moment goes back to 2015. It was during the World Trophy of Pastry FIPGC, the cake design World Championship. I am passionate about pastry myself. There is a special historical story behind Japanese pastry. It is a market that has changed shape over the course of time to become a staple of the Japanese diet, in a country best known for consuming rice on a regular basis. I like their culture and I was very happy that they won this competition because they deserve it so much, a great achievement from them.”

In 2015, Japan was the surprising winner of the World Trophy of Pastry thanks to its artistic creations and original mouthwatering designs. In this championship, which was held in Milan, Japan unseated two countries with a long pastry tradition, Italy, which came in second place, and Austria, which took third place.

In total, thirteen national teams from four continents presented 39 pastry chefs in four specialties: chocolates, ice cream, modern cakes, and pastry sculptures. The Japanese team, composed of Tsuda Keisuke, Kenta Nakano and Hiroyuki Emori, presented three exceptional sculptures artistically representing the symbols of the country of the Rising Sun, such as a whale made of sugar and the stages of flight, from birds to the conquest of space, all in chocolate.

Thirteen international experts made up the jury, headed by the captains of the competition teams and by Christian Beduschi, one of the best Italian pastry chefs.

This competition has taken place every two years since 2015 and is the most prestigious fair in this sector where professionals from the five continents compete for the title of World Champion.

This competition is organized by the International Federation of Pastry, Ice Cream and Chocolate, an association whose fundamental tasks are to carry out activities inherent to the development, knowledge and experiences of the pastry understood internationally as the art of confectionery.

The participating teams presented sweets and pieces that represented the culture, history, and art of their country. Japan, which had already won this competition in 2015, managed to prevail again with a sugar sculpture that reproduced a Torii, an arch or entrance portico usually found in Shinto shrines in the country, along with the traditional Wagasa umbrella, an imposing piece of artistic pastry in the shape of a geisha, and a chocolate sculpture recreating a samurai. The Japanese team was also rewarded with the prize for the best modern cake.

Japanese pastry is composed of sweets that reflect delicacy, perfection and their culture. They are prepared as works of art and should be admired with solemnity.

They are true jewels, handcrafted works of art, since each one of them is elaborated with extreme delicacy and through a unique process for each one of them. We must admire and appreciate their nuances, their aesthetics, their taste sensations, their inspirational base in nature, according to the season of the year in which they are presented.

Each of their pieces is a delicate perfection, small and exquisite morsels. Unique, beautiful, elegant morsels. They usually accompany the tea ceremony, as it accentuates its flavor.

They are always related to nature and always full of symbolism. They anticipate spring by elaborating the cherry blossom, before it blooms, anticipating its arrival. Elaborating these flowers as true works of art, based on their traditional elaborations.

More about the World Trophy of Pastry FIPGC: