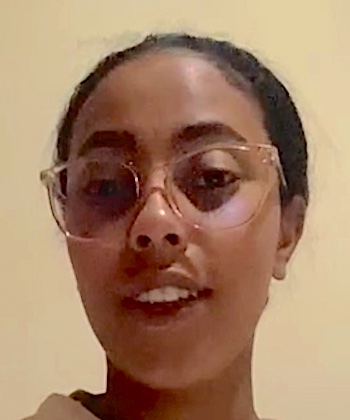 “Hello! I am Bemnet, I come from Ethiopia. My goosebump moment happened last year on Ethiopian Christmas. The story begins four years ago when my grandma passed away. When she was with us, she used to cook an Ethiopian cultural food which we call “Kitfo”. So, that used to be my favorite food. After she passed away, we missed everything about her. Then last year me and my friends were celebrating Ethiopian Christmas at a cultural restaurant in Addis. I ordered “Kitfo” and the dish was served. After my first bite I just got stuck and felt the taste that I had missed. It was almost the same as my grandma’s. So, that was the greatest day of my life, and I cannot forget how I felt.”

Kitfo, one of Ethiopia’s most famous foods

With more than 85 ethnic groups, Ethiopia is a very diverse country. Most ethnic groups have their own unique dishes or share them with each other. Sometimes it is not easy to know which foods and drinks belong to which tribes. For example, the so-called Ethiopian national dish Doro used to be a festive dish from the northern part of the country. It is now more common in the south and center of the country. Similarly, kitfo was associated with the Gurage tribes. Kitfo is now one of the most famous foods in Ethiopia.

Religion played an important role in the evolution of Ethiopian dishes in its uniqueness. During the Lenten season, orthodox Ethiopians follow strict religious rules to abstain from foods containing meat, poultry, milk, cheese, eggs, fish, etc., only vegan foods such as vegetables, grains, beans, fruits, and oilseeds are allowed.

It is common for less adventurous palates to feel a certain apprehension when confronted with an unfamiliar cuisine. The cuisine of the area where one lives is known and mastered. The cuisine of the country, to a certain extent, we could say as well. The cuisine of the continent where you live, you may be partially aware of. But those typical of distant territories so unknown to most Westerners, such as African countries, are especially foreign to us.

This is the case of the traditional cuisine of Ethiopia, the second most populated country in Africa. A cuisine dominated by the predominance of spices and the custom of eating without the need for utensils, using only the hands or elements of the dishes themselves. Circumstance that conditions in an evident way in many cases both the presentation and the ingredients of the recipes.

Most preparations are composed, in essence, of different vegetables and chopped meats, strongly seasoned, stewed in a traditional way. First, chopped onion is cooked or sautéed until dry. Later a fat is added, usually niter kibbeh, a kind of clarified and seasoned butter, to finally add the rest of the ingredients, usually with a mixture of hot paprika and other spices called berbere, and stew.

Kitfo is perhaps the most popular meal among local Ethiopians. It is eaten on special occasions such as feasts and weddings. Kitfo is made with freshly ground raw red meat without fat, then mixed with spicy butter, chili, cardamom and salt in a slightly warm clay pot. The most traditional and authentic version of Kitfo is served raw. It has lightly cooked and boiled versions that you can eat to your taste and preferences. Chopped green cabbage, cottage cheese and a piece of bread called Kocho are served on the side of Kitfo.

To begin with, more than half of the population professes Christianity. In addition, many of them are followers of the Ethiopian Orthodox Church. This religious trend greatly influences the way Christmas is celebrated in the country. In fact, if you decide to spend Christmas in Ethiopia, expect things to be different from the activities and events that you would consider typical or take for granted in other parts of the world.

Because unlike in many other parts of the world, Christmas in Ethiopia is not commercialized to any great extent. The focus is more on family and friend gatherings, as well as strict observance of the spiritual aspects of the holiday. People spend a lot of time praying and singing.

Christmas in Ethiopia is also called Ganna by the Orthodox Church and is celebrated on January 7 each year. It is preceded by a Christmas “eve” fast on January 6. The fast lasts all day and is broken at dawn. On Christmas Day, citizens dress in traditional costumes called “shamma” and head to the church, where the fast officially ends. The shamma is made of a thin white cloth and is worn like a robe.

The religious service or Christmas mass is another peculiar feature of Christmas in Ethiopia. The mass begins at 4 am, as citizens are observed to visit the churches closest to their places of residence. The physical location of the church makes for an interesting story. If the church is of the ancient type, it will be located outside the capital, Addis Ababa. The structure of ancient places of worship is derived from solid, volcanic rocks.