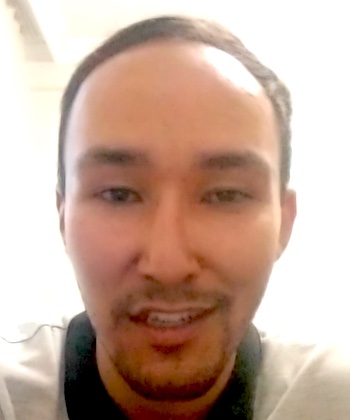 Ahmet: “Hello! I am from Turkmenistan. My goosebump moment was when I saw the Kow-Ata. It is an underground lake not far from Ashgabat. The lake is in the cave at the depth of 60 meters. In the cave, there is a staircase that leads downwards to the water. When you go into the dark cave it gives you goosebumps because when you look up, there are a lot of bats and you feel like you are in a movie. When you reach the water, you notice its unique blue green color. What is also interesting about the lake is that the water temperature is always the same. It is always 37 degrees. There are a lot of legends around this place. People believe that it has healing properties. That is why it was named Kow-Ata – “Father of Lakes”. Centuries ago, wounded slaves would come here to get cured. I think people who love to travel to unusual places should definitely see this natural monument. Thank you.”

The famous underground lake of Kow-Ata

Not far from Ashgabat, just 60 km to the west, is the well-known Bakharden cave with the equally famous underground lake of Kow-Ata inside. The name of the lake translates to “father of caves”. Its popularity is related to the healing properties of the water and the beauty of this subway natural phenomena.

The therapeutic water of Lake Kow-Ata includes 38 elements such as iodine, magnesium, iron, bromine, potassium, sodium, sulfate and others. In addition, there is a legend that during Parthian rule fatally wounded rebel slaves were healed with this water.

The descent into the Bakharden cave begins with a steep staircase that cannot be descended without a flashlight. Below, at a depth of 60 meters, you can see only a small part of Kow-Ata Lake. The water is very warm (34-37 degrees), a little cloudy and has a greenish-blue tinge. The depth of the lake varies from 8 to 14 meters.

A long metal staircase leads to Bakharden Cave, where the 235-foot-long lake is located. The warm waters contain a large amount of different salts and minerals, especially sulfur, which is responsible for the distinctive smell inside the cave. Therefore, the underground lake Kow-Ata is also the closest thing Turkmenistan has to a thermal spa.

Its healing water is composed of hydrogen sulfide, iodine, magnesium, sodium, sulfate, as well as chlorine, aluminum, bromine, iron, antimony, a total of 27 chemical elements. Bathing in the water has a beneficial effect on the body and improves blood circulation.

In addition to being a place for swimming and a thermal spa, the cave is also a natural monument, established to protect the largest known colony of bats in all of Central Asia. It is a matter of personal taste, whether this fact adds up to a pleasant bath or not. According to archaeological data, the cave has been visited by people for more than 2000 years.

This cave is one of the most famous and crowded tourist places in Turkmenistan. It is in the foothills of Kopetdag in the Bakharden district of the Akhal region, about 20 km from Bakharden village and 120 km from Ashgabat.

The Bakharden cave appears as a large room with a length of 250 meters and a width of 10 to 50 meters. Significant mineralization and a high temperature of 33 – 37 degrees C indicate that the waters of the Bakharden underground lake rise from great depths.

The air in the cave is saturated with moisture and hydrogen sulfide vapours, especially in the summer. At this time of the year, drops of water flow down from the vaults of the cave. Of the vegetation in the cave, only some species of lichens were found – representatives of lower plants.