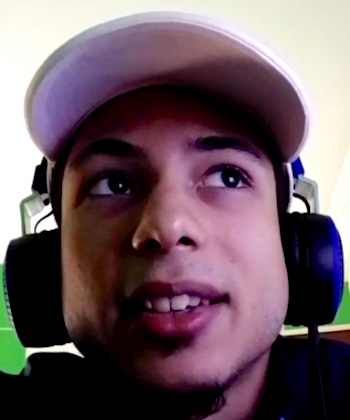 “Hi! My name is Rafael. I am from Saint Vincent and the Grenadines and this is my goosebump moment. There is a volcano near where I live called La Soufrière and it recently erupted. Yes, I know, I am a little scared. But I realized because I left my house and I saw through the window a lot of ashes that came out of the volcano, and I remember that the authorities told us that we had to clear the area where we lived, because there was a risk area because the volcano would continue to erupt, around 6000 people evacuated there, and obviously that affected us a lot, but as time passed we all returned to a normal life with some problems and with some volcano having erupted again.”

La Soufrière is an active volcano on the island of St. Vincent, in the Windward Islands in the Caribbean Sea. It belongs to the country of St. Vincent and the Grenadines.

At 1,234 m (4,049 ft), it was the highest peak on St. Vincent, but is now the second highest due to the latest eruption. La Soufrière is the northernmost island and this the youngest volcano. It is a stratovolcano with a crater lake.

La Soufrière began an effusive eruption on December 27, 2020. An explosive eruption occurred on April 9, 2021 and continued the following days with pyroclastic flows. The activity pattern of the ongoing eruption is comparable to that of the event that occurred in 1902, which had a Volcanic Explosivity Index of 4. The volcano is known to have erupted 23 times in the last 4,000 years and has been dormant since 1979.

Evacuation of the island’s inhabitants began when the explosive eruptions started. Many countries, including islands in the region, and organizations provided aid and support. Services such as electricity and water were severely affected. The emitted ash and sulfur dioxide gas affected the population. The COVID-19 pandemic made evacuation difficult and required the usual covid-19 precautions to avoid outbreaks.

Because volcanoes like La Soufrière can suddenly switch between effusive and explosive eruption phases, volcanologists were on high alert once an effusive eruption formed a new lava dome within the summit crater on December 27, 2020. The lava dome was created on the west-southwest rim of an earlier dome that had formed during the 1979 eruption. Government officials began communicating with residents in the area during December and January to review evacuation plans in case volcanic activity intensified.

Of the 45 currently active volcanoes, according to Smithsonian data, La Soufrière, located on the Caribbean Island of St. Vincent, is the one that worries volcanologists the most, given its nature and recent events around it.

A series of explosions erupted from La Soufrière so violently that even the Multi-angle Imaging Spectroradiometer (MISR) on NASA’s Terra satellite was able to measure a plume of smoke and ash at an altitude of 20 kilometers, meaning that it rose into the stratosphere.

The height reached set off alarm bells at the Seismic Research Centre (SRC) of the University of the West Indies (UWI), which expressed its concern about the possibility that the sulfur dioxide (SO2) emitted by the La Soufrière volcano could reach Spain and Africa, a possibility that has become a reality.

Another of the issues surrounding this volcano is its ability to affect the climate, as the gas quantities of sulfur dioxide can cause global cooling, while volcanic carbon dioxide, a greenhouse gas, has the potential to promote global warming.

In this case, NASA experts indicate that a volcano needs to inject at least five teragrams of sulfur dioxide into the stratosphere to have measurable climate impacts, which is not the case for this volcano.

More about La Soufrière volcano in St. Vincent and the Grenadines: