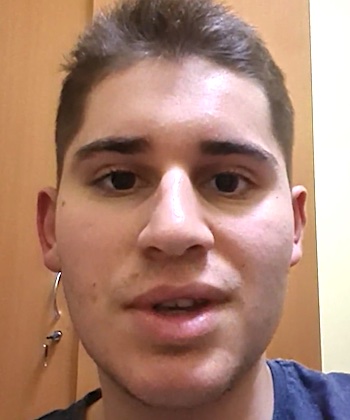 “Hello! My name is Andrew and I am from Serbia. My goosebump moment was definitely LeBron winning the title with the Cleveland Cavaliers in 2016. Anyone who knows anything about the NBA or just follows it from time to time certainly remembers the day when game seven was played. It was a whole, it was a great game, the whole series was great all around and there were many exciting moments. At one point LeBron’s team the Cleveland Cavaliers were down 3-1 to the Golden State Warriors. Never in history has any team in the history of the whole NBA since it started ever come back from being down 3-1 in the NBA Finals. LeBron with the Cleveland Cavaliers were the first to ever do that and accomplish that and the biggest the most goosebumpiest moment was LeBron screaming at the end of the game when he is handed the championship, ‘’Cleveland this is for you!’’ and any NBA fan can feel the goosebumps from that moment certainly.”

The Cleveland Cavaliers made history in 2016 by being crowned champions in the United States National Basketball League, the NBA, for the first time.

The team led by LeBron James defeated the Golden State Warriors 93-89 in the seventh and final game of the NBA Finals. That was the team’s first title and the first time a team trailing 3-1 in the final had come back and won.

This victory ended a drought of titles in the sport for Cleveland, which had not enjoyed a championship since 1964, when the Browns prevailed in the American Football League (NFL).

James contributed a triple-double of 27 points, 11 rebounds and 11 assists, and his teammate Kyrie Irving, key in the victory, had 26, while Draymond Green shone for the Warriors with 32 points, 15 rebounds and nine assists.

James was named the Most Valuable Player of the NBA Finals after leading his team to overcome the deficit of three lost games and be crowned champion. It was the player’s third title in seven finals – six in a row. He got the previous two with the Miami Heat.

James returned to the Cavaliers in 2014, the team he played for from 2003 to 2010, with the intention of winning a title with his city team.

A story of struggle and sacrifice

LeBron James, a name that every NBA fan has in mind every time they talk about the best basketball players today, has earned that place hard and hard.

Born in Akron, Ohio, on December 30, 1984, his mother Gloria James was 16 years old and his father was an ex-convict who abandoned them at the birth of LeBron. Gloria decided to support LeBron on her own, but things got complicated when Gloria’s mother passed away suddenly.

Not being able to have a stable job, Gloria had to constantly change places to live, which was even more complicated since she had a little LeBron in her arms.

Despite the complex situation, Gloria was able to pull him through as best she could, try to get him away from the violence and complicated situations that are experienced on the streets every day.

At an early age LeBron showed an affinity for sports. When he arrived at school he had a hard time making friends, but he was particularly good at basketball and American football, which served as catharsis for the conflictive lifestyle he led.

LeBron began to show his potential in sports when he participated in the Pee Wee category. From here on, his life would be very different thanks to his trainer Frankie Walker. Walker, in addition to being an exceptional coach, was an exemplary man. He was worried about LeBron mainly in the educational field and therefore, he proposed to Gloria that she let LeBron live with his family.

At 14 years old, LeBron James was already considered a high-level player, and the national amateur champion Dru Joyce II became LeBron’s coach and mentor. Despite being an incredible player, the Walkers and Joyce kept him out of the professional arena so he could finish his studies at St.Vincent-St. Mary High School.

In 1997, James made his first appearance at the national level, qualifying for the AUU National Championship in which he reached the final. During this event, he brought out all his talent and showed that he was one of the best players in that championship, dominating the court.

At the age of 17, James was selected in the first position of the 2003 NBA Draft by the Cleveland Cavaliers. With the Cavs, he ratified the promising future that he forged during his time at the institute, and in his first season he won the NBA Rookie of the Year. Since arriving in the league, LeBron has set many early records, including the youngest player in history to reach 10,000, 15,000 and 20,000 points.

The Cavaliers began playing as an NBA expansion team in 1970 under the ownership of ambitious businessman Nick Mileti, who at one point owned not only the Cavs but also the Cleveland Indians of baseball and the NBA franchise, City Hockey World Cup (the Cavaliers have gone through several changes of ownership).

Coached by Bill Fitch and playing in the old-fashioned Cleveland Arena, the Cavs finished their first season with the worst record in the league, a frustrating exercise epitomized by John Warren willingly shooting and scoring at the winner’s basket during a game.

In 1985, however, Wayne Embry took over as the team’s general manager and hired Lenny Wilkens as the Cavs’ head coach for the 1986–87 seasons.

Wilkens built the Cavs into a defensive-minded team that quickly saw a good measure of success. With a roster that featured center Brad Daugherty, guard Mark Price and forward Larry Nance, the Cavs won 42 games in the 1987–88 season, but were eliminated by Michael Jordan and the Chicago Bulls in the first round of the playoffs. However, the next year’s postseason series against Jordan’s Bulls turned out to be significantly more memorable.

More about LeBron James and the Cleveland Cavaliers: