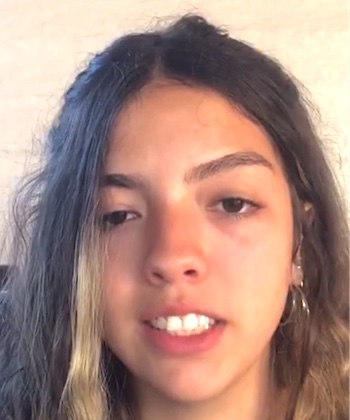 Magdalena: “Hello! I come from Uruguay. My goosebump moment was when I watched this series entitled ‘Maid’, which is about a young mother who struggles with her family circle, while at the same time trying to care of her three years old daughter and find a job to make a living. I would say that although the plot is rather unhappy, sometimes it turns out to be so emotional that it actually gives you goosebumps! I believe that the reason why it is so moving is because people can identify with the same character, and they end up establishing a connection with her. Overall, I would say that no other goosebumps that I have ever had can compare to the ones that ‘Maid’ gave me.”

One of the most watched series

Despite its recent premiere on October 1, overshadowed by the furor caused by “Squid Game”, the series “Maid” has been gaining a special place in the hearts of viewers, and its plot has brought more than one tear to their eyes.

This production, one of Netflix’s most watched, is based on real-life events and revolves around the life of Alex, a 25-year-old woman who escapes with her young daughter Maddy from the abuse of her partner, with whom she lived in a trailer.

The series was created by Molly Smith Metzler and is inspired by Stephanie Land’s memoir “Maid: Hard Work, Low Pay, and a Mother’s Will to Survive”. In her work, she recounts the details of working as a nanny and dealing with the injustices faced by those who need the help of the U.S. government.

A story of struggle and overcoming

Imagine you have just turned 20, you have a perfect relationship, good grades, you live in America, and you got a scholarship to study Art and Literature at the University. However, one day you get pregnant and decide to have your daughter. Your partner doesn’t agree with your decision and your world falls apart.

So begins “Maid”, the Netflix series that tells the story of struggle and overcoming through its main character, Alex, who will do the impossible to save herself and her 3-year-old daughter from this drama.

Its author, Stephanie Land, managed to overcome a situation very similar to that of the protagonist of the series and wrote a diary narrating everything that had happened.

This production is also a critique on the failed American system and a reflection on how the class struggle is still entrenched in society. The series is honest, direct and will make you rethink many things, for example, the issue of domestic violence.

“Maid” doesn’t deal with it through physical abuse, but analyses it in a much more subtle and profound way. Alex has never been physically beaten, but she has been subjected to all kinds of psychological abuse that makes her find herself lost in a spiral of hatred and other emotions.

Without a roof over her head, Alex decides to go to a shelter for abused women. There she discovers that there are many women in the same situation and that getting any kind of financial help is an odyssey. That is why she is forced to put aside her dream of going to college and start cleaning rich people’s houses to support herself. There she learns how money does not buy everything and how people who apparently have had it much easier than her, also hide among luxury homes, expensive wines and prohibitive whims, almost equally serious dramas.

Who played the character of Alex on “Maid”?

“Maid” stars Margaret Qualley, who plays the role of Alex. We will be hearing more about her soon, as she has several interesting projects coming up. For example, the actress will be seen next year in the movie “Sanctuary”, and then she will participate in “Fred & Ginger”.

The Montana-born actress made her debut in front of the camera with a minor role in the film “Palo Alto” (2013). Subsequently, she achieved greater recognition after playing a troubled teenager in “The Leftovers”. Similarly, she garnered good reviews for her portrayal of actress and dancer Ann Reinking in the biographical miniseries “Fosse/Verdon”. Other projects include “Death Stranding” and “Once Upon a Time in Hollywood”.

The author of the novel and original story, Stephanie Land, spoke about the experience of seeing the drama of her life in the Netflix catalog.

More about the series “Maid”:

One Comments "“Maid”, an emotional series"