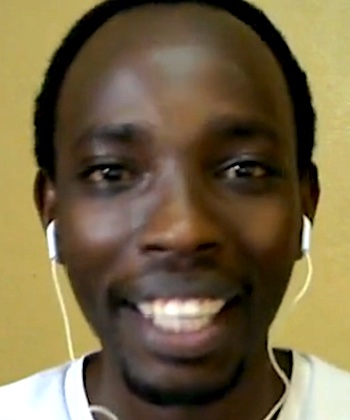 “Hello. My name is Tresor and I am from Burundi. My goosebump moment was when Max Verstappen won his first Formula 1 Championship this year on the last lap of the last race. The 2021 Formula 1 edition was full of drama with Max and Lewis Hamilton bumping into each other twice, too crazy. First crash in July during the British Grand Prix and, second was in September during the Italian Grand Prix. All season long, the two best F1 drivers were going at it showing no mercy and it was really, really tight. The fact that Max won the Championship by overtaking Lewis on the last lap of the season made that moment legendary and I still have chills thinking about it.”

With an epic finish that will go down in history, Dutch driver Max Verstappen conquered the Abu Dhabi Grand Prix and, with it, won the first championship of his Formula 1 career.

Thanks to a safety car, Verstappen managed to overtake Hamilton on the last lap, when the Brit had dominated the entire race. Verstappen finished ahead of Hamilton and Spanish driver Carlos Sainz.

Mexican driver Sergio Pérez was in podium position for almost the entire race, but with two laps to go, he was out of the race due to a problem in his car. Although he was unable to win the Drivers’ World Championship, Mercedes did win the Constructors’ Championship ahead of Red Bull Racing.

Hamilton took the lead from the first lap despite Verstappen putting up some resistance. In a manoeuvre the Brit went off the track. However, he rejoined and immediately retook the lead on the outside, in an incident that the judges considered a racing incident and did not penalize Lewis.

Mexico’s Sergio Pérez added some excitement to the race and took advantage of the pit stops to take the lead. Checo’s task was clear, and he tried to contain the Hamilton as much as he could on lap 21 to allow Verstappen to get close again.

Driving at the limit, but clean, the Mexican driver held Hamilton long enough for the Dutchman to get back to within two seconds of the Brit. The Mexican’s great driving earned him praise from Verstappen in the middle of the race: “Checo is a legend,” said the Dutchman over the radio. Quite the opposite of what Hamilton thought, who described the driving as “dangerous”.

Unfortunately for Red Bull’s cause, Hamilton picked up the pace again and started to pull away from Verstappen. The Dutchman took advantage of a virtual safety car on lap 37 to change his tires for the second time in the Abu Dhabi GP and, in doing so, improved his race times again to gradually close in on Hamilton, who was sending the message over the radio that he would not be able to keep up.

Verstappen failed to close the gap to less than 10 seconds with respect to Lewis significantly, but on lap 54, there was another safety car, and the Dutchman took advantage of it to make a third tire change, this time red. The race resumed with one lap to go, and Verstappen finally managed to overtake Hamilton with a great manoeuvre.

Unfortunately, Sergio Pérez was out of the race due to a problem with his car two laps from the end of the Abu Dhabi GP.

Born to win in Formula 1, Dutchman Max Verstappen fulfilled his mission at the age of 24, becoming a Formula 1 world champion for the first time on Sunday, a destiny that his parents, both drivers, had begun to forge.

He was already partnered with his father, Jos Verstappen, 107 races between 1994 and 2003, with two podiums in the first year. His mother, Sophie Kumpen, was a teammate of another Formula 1 world champion, Jenson Button, in karting. The Belgian was “a fantastic driver, very fast,” they recalled on the F1 podcast.

The records of precocity were left behind. The Dutchman, born in Belgium on September 30, 1997 and a long-time resident of Monaco, is the fourth youngest champion, at 24 years, 2 months and 12 days, behind Sebastien Vettel, Lewis Hamilton and Fernando Alonso.

Lewis Hamilton, the most successful British driver of all time

Lewis Hamilton, 24, has now accumulated four world titles (2008, 2014, 2015 and 2017). In the last Grand Prix of 2008, at the Brazilian circuit of Interlagos, and in a hotly contested final stretch, he won his first world title, becoming the youngest champion in the history of the specialty. He thus avenged the disappointment of the previous season, when, despite starting as big favorite, he ended up losing the title, also on the last day.

The son of Anthony Hamilton, a Caribbean emigrant from the island of Grenada, and Carmen Lockhart, a British national, his father gave him his middle name (Carl) as a tribute to his great idol, the athlete Carl Lewis.

After his successes in Karting, Hamilton became the spoiled child of Ron Dennis, the boss of McLaren-Mercedes, who made him take the leap to single-seaters in 2001, in one of the events in which future Formula 1 drivers begin to be forged, the Winter Series of Formula Renault. In his debut he finished fifth, in front of older drivers. His progression made that in 2002 he won three races with Manor Motorsport and climbed to the final podium as third. The following year he won the title with Manor. That was just the beginning of his brilliant career.

His brilliant career, combined with his photogenic personality and his self-confidence at press conferences, have made him one of the most popular sportsmen in the United Kingdom (even Queen Elizabeth II of England entertained him) and one of the richest. Not in vain, after becoming champion, Ron Dennis presented him with a blank check for the driver to put a figure on it. He did not hesitate: 138 million dollars for the next five years, commissions aside.