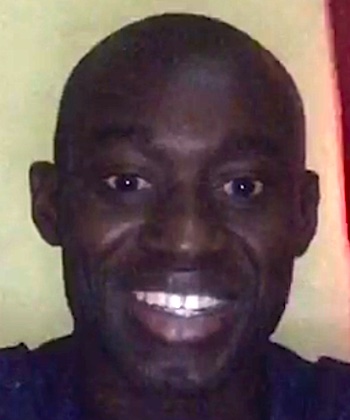 “My name is Ibra Ngom. I am Senegalese. I am going to talk about my goosebump moment shortly. So, it was in 2015 when I was trying to join the Peace Corps as a language and cross culture facilitator. Before that I left my former job to join the Peace Corps and it was not possible to come back to my former job. So, I had one option: to pass and we needed to do what is called TOT: Training of Trainer. But at the end they said that there are few people who were chosen and they told us that the next day they are going to give us the result. From this day to the next day, I spent the most stressful moment in my life, I think. And I was trying to, how to call it, to support myself by thinking that maybe if I miss it, I am going to find another job. And the day I was one of them, I was in the group of the chosen candidates and I celebrated. I was very, very happy at the end. So, it was not easy because I had just one option: to get it or to go find another job. Thank you for your time.”

Making a difference in the lives of others

Joining the Peace Corps is a big decision: it’s 27 months of your life spent in a struggling country, without the comforts of what many of us consider everyday life. However, it is a priceless experience that you will never forget. You will leave a mark on people’s lives; you will make the world a little better and it will look great on your resume.

That’s because the Peace Corps is a U.S. federal government agency dedicated to building and maintaining relationships with global communities through the service of dedicated volunteers and professionals.

Peace Corps staff are passionate and dedicated to the cause of service. They do critical work to support volunteers and provide them with the opportunity for a life-defining experience.

Being part of the Peace Corps

Each year, approximately 15,000 to 18,000 people apply to join the Peace Corps. While locations vary from year to year, current opportunities range from the islands of Jamaica and the Dominican Republic to the mountains of Nepal and Peru. Volunteers serve in China, Madagascar, South Africa and 50 other countries around the world.

Since its founding during the Cold War between the United States and the Soviet Union, the Peace Corps has become the best-known overseas volunteer program. Over the past 50 years, young people have joined the organization in masse to help others, learn the ways and languages of different cultures and gain an advantage in the job market when they return.

The Peace Corps is looking for people who have demonstrated a love of helping others. If you show up with experience as a volunteer, whether in a hospital, a soup kitchen or teaching children, you show them that you already understand what is expected of you.

How was the Peace Corps born?

In 1961, the world’s superpowers went head to head during the Cold War. The Soviet Union and the United States clashed in Berlin, prompting the Soviets to build a wall separating East and West Germany. A CIA-sponsored military invasion to overthrow Cuban President Fidel Castro ended with the disastrous Bay of Pigs invasion and set the stage for another confrontation in 1962 with the Cuban Missile Crisis. Halfway around the world, Southeast Asia was considered the crux of the war between communism and democracy, prompting President John F. Kennedy to commit special forces, military equipment, and financial support to South Vietnam.

While the Peace Corps’ mission is to “promote peace and friendship in the world,” superpower competition was a major factor in its creation. President Kennedy recognized that the Soviets “had hundreds of men and women, scientists, physicists, teachers, doctors, engineers, and nurses … prepared to spend their lives abroad in the service of world communism.” Kennedy wanted a counterprogram that would involve “Americans more actively in the cause of global democracy, peace, development and freedom”.

As a result, the Peace Corps was founded by executive order on March 1, 1961, and authorized by Congress that same year. The first group of 51 volunteers arrived in Ghana to begin their service. By the end of 1961, more than 500 volunteers were serving in nine host countries – Chile, Colombia, Ghana, India, Nigeria, the Philippines, St. Lucia, Tanzania, and Pakistan. By 2015, nearly 220,000 Americans had served in 140 different countries.

More about the Peace Corps: