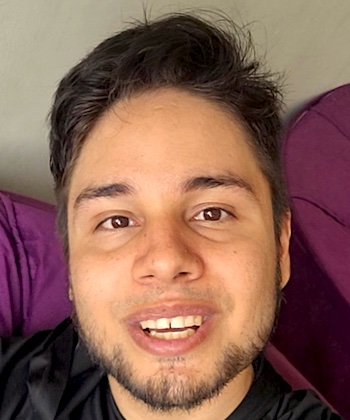 “Hello! My name is Alejandro and I come from St. Kitts and Nevis. My goosebump moment was in my first karate competition, some years ago. I was 17 years old, I traveled with the karate team of my local city to another city. I was really nervous once I entered the stadium. I put my gloves on, and joined the karate arena called tatami, my hands were shaking. The referee called one by one the competitors to the arena, then we must do a performance called “Kata” and after that, we must do combat. Oh my god, all the other competitors showed their skills, and they were amazing. Well, just after some minutes my first combat started. My opponent was very skillful  but I also tried my best. At the end, I won the bronze medal, it felt so good. That was one of the best moments in my life.”

The satisfaction of practicing karate

For martial arts practitioners, one of the most relevant aspects in terms of growth and development is participating in tournaments and competitions. This is not precisely for the victory or defeat, but for the improvement of the character of its participants.

Through its practice a series of values and fundamental principles are reflected, such as respect, work, perseverance, sacrifice, eagerness to improve, humility, as well as a physical improvement provided by this martial art.

Karate is a very ancient discipline and is based on Bushido, a code of ethics whose principles are based on loyalty and honor. The sport also consists of self-defense using the human body as a tool. Etymologically, ‘karate’ means ’empty hands’ since it involves fighting without using weapons of any kind.

To practice karate, a special outfit called ‘karategi’ is required, which has an ‘obi’ or belt whose color symbolizes the student’s learning level, that is, the hierarchy that is acquired within this discipline through continuous training and overcoming difficulties.

Karate begins with basic positions, basic blows, and basic katas, but as one learns and knows the techniques, one moves up in level. The student is examined approximately every 6 months and it is determined if he/she is ready to move to the next level according to the learning acquired. They go from white until they reach black, but the process does not end here.

The benefits of practicing Karate

Karate is a sport that offers physical and mental benefits, especially if practiced from childhood. Although karate consists of fighting techniques with one’s own body, it is not an offensive or aggressive sport, but a defensive one.

It is a valuable tool for the people who practice it, as it allows them to defend themselves against an attack. Likewise, all karate instructions and katas begin with defense; we learn to defend ourselves as part of the philosophy.

Practicing this sport requires concentration and energy to perform each exercise. It is recommended for children with anger problems or attention deficit because it allows the child to learn to control their emotions, to release energy and to concentrate on the activity they are doing.

This is an ability that is acquired with the practice of karate, since it is necessary to coordinate the arms with the legs. This is necessary for the exercises since all of them have this combination.

This sport is recommended by specialists since it has respiratory and cardiological benefits. Another benefit is that the constant practice teaches us to control our emotions thanks to the philosophy by which it is governed. Likewise, this allows people to face life’s dissatisfactions in a better way.