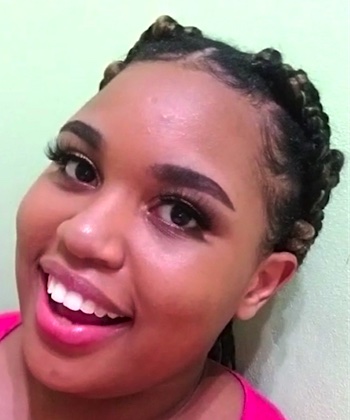 Becky: “Hi there, I am from the beautiful island of Saint Lucia, located in the Caribbean. My goosebump moment was when I noticed our National Landmarks Gros Piton and Petit Piton for the first time in person. I visited my aunt and my cousin in Miami and upon returning home the plane flew past the Pitons. I could not believe my eyes. It was as beautiful as ever. It is true, I had seen pictures on Google of the Pitons. I had also seen them in textbooks when I went to school. However, up there in the sky and seeing it with my own eyes, it was even more beautiful and unimaginable as it could be. At that point in time, I was so proud to be a Saint Lucian.”

The geological monument of St. Lucia

The famous Pitons on the Caribbean Island of St. Lucia are two volcanic peaks that are among our top 10 most famous and beautiful mountains in the world. The two stunning forested coastal peaks offer fantastic photo opportunities and wonderful hiking and viewing opportunities. Many tourists refer to them as the highlights of the Lesser Antilles. Since 2004 they have been a UNESCO World Heritage Site.

The Gros Piton (Translated: Large Mountain Peak) reaches a height of 771 m, the Petit Piton (Small Mountain Peak) to the south is 743 m high. Both peaks are close to each other and are near the two settlements Soufrière and Choiseul on the southwest coast of St. Lucia.

The two pitons are remnants of volcanic activity in St. Lucia. Evidence of their volcanic past are still smelly sulfur springs and bubbling mud holes in the Pitons Caldera.

A beauty in the southern Caribbean Sea

It is a spectacular view, which almost makes one rub one’s eyes, just as the characters in animated films do to express amazement. It is the panorama of Les Pitons de Santa Lucia. Two volcanic cones that seem to emerge from the sea as if they were “dressed” in green.

It’s a sight that makes anyone think they are on an idyllic island in French Polynesia, but no, they are on the beautiful island of St. Lucia, in the Caribbean Sea. Of the two volcanic cones, Gros Piton, a UNESCO World Heritage Site, is the higher peak and rises to 2,530 feet; Petit Piton, the lower of the two, is 2,438 feet high, and together they form a beautiful picture beside the blue sea.

St. Lucia, one of the Windward Islands in the southern Caribbean Sea, gained its independence from Great Britain in 1979 and in addition to the spectacular panorama of Les Pitons, perhaps the most picturesque view in the Caribbean, it has many other attractions for the traveler, whether coming by plane or by cruise ship.

What to do in Saint Lucia

This island is famous for its beaches, sun, and sea, but there are also many other attractions inland waiting for you. St. Lucia is a tropical island in the eastern Caribbean Sea with forested mountains, banana plantations, palm trees and fishing villages. At 43 kilometers (27 miles) long and 22 kilometers (14 miles) wide, it is the second largest of the Windward Islands group.

For more than two hundred years, St. Lucia was the subject of a bitter dispute between Great Britain and France, and the island changed hands several times. It is now an independent member of the British Commonwealth.

One of the first stops for many visitors is Castries, the island’s capital. Taste fresh foods and spices and enjoy the local culture at the market in the main square. It is open every day except Sundays. Learn about the history of the place at the 19th-century Cathedral of the Immaculate Conception and the old barracks of Fort Charlotte, now government buildings. Relax in the sun at Vigie Beach.

If you like physical activities and adventure, you can climb the Pitons. They can be seen from almost the entire island. If you prefer something less strenuous, you can enjoy a hike through one of the rainforest reserves in the interior of St. Lucia. One of the most popular routes is the Barre de l’Isle trail, a 2-kilometer (1.25-mile) hike that is also suitable for children. Don’t forget to bring your binoculars or camera to capture some of the region’s endemic birds, such as the colorful St. Lucia amazon.

Be sure to visit other natural attractions on the island as well. La Soufriere volcano is the only one in the world that you can visit by car. Its last eruption took place 40,000 years ago, after which it collapsed on itself. There is a road that leads to the crater and crosses it while passing by bubbling mud ponds and steam vents.

Visit Diamond Falls, whose waters are rich in minerals. Fed by rainwater and sulfur springs, the water and rocks of this waterfall change color depending on mineral content. Diving is not allowed, but for a small fee you can relax in the mineral baths nearby.

Santa Lucia has a humid tropical climate with an average temperature of around 26 degrees Celsius (78 degrees Fahrenheit). The hottest months are June through August, and the coolest months are January and February.

More about Gros Piton and Petit Piton in Saint Lucia: