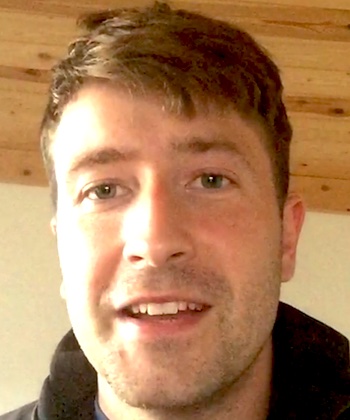 Mark: “Hello, I come from Denmark and my goosebump moment was the first time I walked into “Rumble” and I saw that a famous Danish UFC fighter, Nicolas Dalby, was training there. I had been training for about a year at this time and this was the first time that I have gotten to see a real fighter in the industry, so that was a very surreal experience because I have seen him on television. I have seen his YouTube clips and on Facebook and it was very inspiring getting to see him in person training at the same gym that I was training in at the time.”

Nicolas Dalby started learning karate as a teen to defend himself against bullies. He moved from Sønderborg to Copenhagen to be around his friends. After five years of training karate, he started training in “Rumble Sports”, one of the biggest MMA gyms in Copenhagen.

He had a total of five amateur fights, losing the first one by decision and winning the rest of them. Dalby was quickly recognized for his powerful striking and knockout power. He became one of the most feared strikers in Europe after many brutal knockouts.

Who is Nicolas Dalby?

A professional MMA fighter since 2008, Nicolas Dalby is currently signed to the welterweight division of UFC. The Danish fighter is a former champion as well as an interim champion in the Cage Warriors.

However, he lost the two UFC battles that followed, both via unanimous decision against Zak Cummings and Peter Sobotta, and was subsequently released from the UFC.

Following his unsuccessful UFC stint, he struggled with depression and alcoholism. Nevertheless, he did no gave up in his MMA career, rather, he racked up a 3–1 (1 NC) record in Cage Warriors including winning the interim Welterweight Championship.

Return to the UFC

Dalby was scheduled to face Danny Roberts on March 21, 2020 at UFC Fight Night: Woodley vs. Edwards. Due to the COVID-19 pandemic, the event was ultimately postponed. The bout with Roberts was rescheduled and was expected to take place on July 26, 2020 at UFC on 14.

However, Roberts withdrew from the bout citing injury and was replaced by Jesse Ronson. Dalby lost the bout by rear-naked choke in the first round. The outcome of the bout became a no contest after Ronson received a 22-month suspension from USADA for testing positive for Methandienone.

Dalby was scheduled to face Sergey Khandozhko on June 26, 2021 at UFC Fight Night 190, however, Khandozhko pulled out due to injury and was replaced by Tim Means. Dalby lost the bout by unanimous decision.