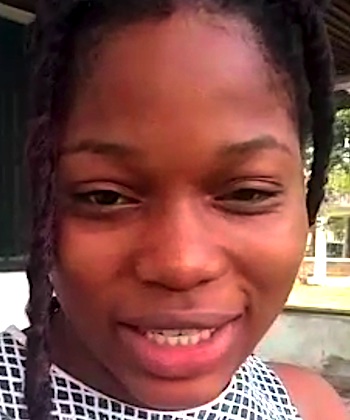 Dumebi: “Hello, I come from Nigeria. My goosebump moment happened after I saw a video on YouTube about my country Nigeria and its diverse culture. It centered on the strength and boldness that we Nigerians exude. We are very resilient people, we don’t give up or give in, and we don’t succumb and can’t be submerged. The very line that gave me goosebumps goes thus: “been through thick and thin, we stand strong and still like an iroko tree”. This particular line makes it clear that despite the fact that we have various tribes and cultures, we are still one great people. Our strength lies in our diversity, our diversity makes us beautiful. We are one great people. Thank you.”

The most beautiful thing about Nigeria is the people. They are very special. In fact, there is a study that places Nigeria among the countries with the most optimistic people in the world. And it’s true. They live with a smile, happy in the midst of unparalleled chaos. The people are friendly, always ready to have a good time and to help, and for that reason, they are unique.

Nigeria is a multi-ethnic country in North Africa. With almost 200 million inhabitants, it is also one of the largest countries in the world by population. 25% of Nigerians live in urban settlements, but there are at least 24 cities with populations greater than 100,000 inhabitants. The variety of customs, languages and traditions given by the 250 ethnic groups that coexist in Nigeria give the country its great diversity.

The Edo predominates in the region between the Igbo and Yoruba. Approximately 80% are Christians, while the remaining 20% worship their deity Olorun, also called Ogu.

Nigerian ethnic groups, sometimes minorities, are found throughout the country, especially in the central and northern areas. The Hausa-Fulani tend to be Muslim, while the Igbo are predominantly Christian, as are the Efik, Ibibio, and Annang. Indigenous and native religious practices remain important in all ethnic groups in Nigeria and these beliefs are often mixed with Christian beliefs.

Nigeria is also famous for its English literature and popular music. Since the 1990s, the Nigerian film industry, sometimes called “Nollywood”, has become a rapidly growing cultural force throughout the country, on the continent, and even in the conservative north. The same is true of Western music, dresses, and movies.

Nigerian music includes many types of folk and popular music, some of which are known throughout the world. Local and traditional musicians use a number of different instruments, such as the Gongon drums. Their masks are world renowned.

Nigerians like food that is spicy and rich in starch. The classic dish is a spicy pepper stew with meat or fish and starch, usually ground yucca or sweet potato. Another common dish is jollof, spicy rice cooked with palm oil and tomato. Cutlery is not usually used to eat, people eat with their right hand.

Nigerian traditions are wide and vary across different cultures. For example, it is typical for Nigerians to have three weddings, unless they are marrying foreigners. The first wedding is traditional, the second is in court, while the third is in church or in a mosque.

The reason behind these weddings is that the union must be recognized by religion, law and tradition. Other traditions include the mother-in-law helping the daughter-in-law after giving birth and younger men seeking apprenticeship work with older and richer men.