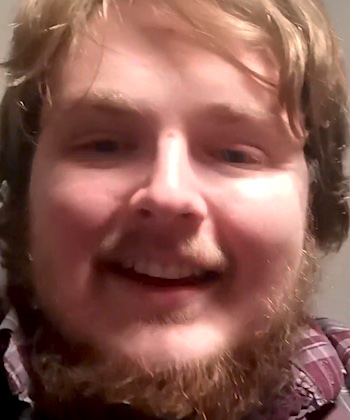 “Hello! My name is Mathias, and I am from Greenland, and I am here to tell you about my goosebump moment. My goosebump moment comes when I play the videogame Red Dead Redemption 2. Now let me tell you a bit about it. Red Dead Redemption 2 is a video game set in 1899. It is the end of the Wild West, all the cowboys are gone, there are only a few outlaws left, and civilization has taken over. Now, you play as this character named Arthur Morgan. Arthur Morgan is a man raised by Outlaws. He is a bad man. Or at least he keeps calling himself a bad man. However, during the end of Act 5 when he redeemed himself and he became a good man, you ride from the topmost of the map to the southernmost bit of the map. While the song ‘Unshaken’ by D’angelo plays, and when that happens I get chills to this day, every time.”

Red Dead Redemption 2 is without a doubt one of the best games to have come to the PlayStation 4 and Xbox One generation. Part of what makes it such a memorable experience has to do with its protagonist, Arthur Morgan, who quickly won the hearts of the players, although for many, John Marston is still the better of the two.

Like the first installment, this action-adventure video game is played in both first and third person and set in the American Wild West. It was set in an open world environment with a fictionalized version of the western, midwestern, and southern United States in 1899. For most of the game, the player controls outlaw Arthur Morgan, a member of the gang led by Van der Linde, while completing numerous quests to progress through the story.

How was this video game developed?

Work on Red Dead Redemption 2 began in 2010, when production on the first game had ended. Rockstar employed 1,200 actors to portray their characters, 700 of them with dialogue. Each non-playable character has their own personality and character and the ability to interact with them; having written about 80 pages of script for each.

To create the horses, real animals were studied for years, looking for the personality of each breed to define their behavior and characteristics.

Woody Jackson, the composer who already directed the Red Dead Redemption soundtrack, repeated again at the controls of the prequel, beginning the recording sessions in 2015.

On November 27, the Red Dead Online beta officially launched, in the form of early access for those who purchased the Ultimate Edition. Access to this beta was extended to the total number of players each day of the week, ending on Friday the 30th of that month.

The scenario of Red Dead Redemption 2

Developed and published by Rockstar Games, the world of Red Dead Redemption 2 spans five fictional states of the United States. The states of New Hanover, Ambarino, and Lemoyne are new to the series, lying just north and east of the world and map from the first game, while the states of New Austin and West Elizabeth return for gameplay. The map is bordered by two major rivers: the Saint Louis and the Lannahechee, which flow into Flat Iron Lake.

Horses are the main forms of transportation, and there are various breeds for this, each with different attributes. The player must train or tame a wild horse to use it, except for stolen horses; however, they must saddle a horse to acquire ownership of it.

The player can also witness or participate in random events found while exploring the game world. These include ambushes, crimes committed by other people, calls for help, shootings, public executions, and animal attacks. For example, as the player explores the Wild West, they may encounter specific people in danger.