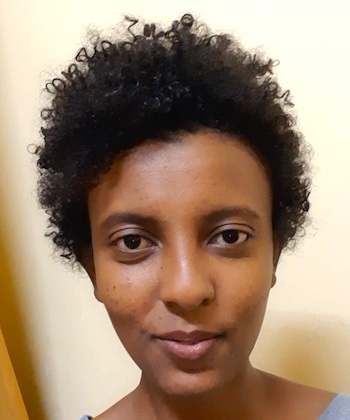 “Hi! I am Yidu and I am from Ethiopia. My goosebump moment was three years ago when our prime minister announced that our country had officially reconciled with the neighboring country of Eritrea. There was this condition where there was no war, no peace, and there was no access to that country, where my maternal grandfather had been stuck for the past 40 years. So, to be able to see my mom’s face light up in hope of, you know, being able to have access to that country, being able to find out what had really happened to him, being able to even look for him. You know, it was a blessing, and I will never forget that day. It was one of my goosebump moments in life. Thank you.”

A historic declaration of peace

On July 9, 2018, Ethiopia and Eritrea signed a historic joint declaration of “peace and friendship” as a sign of commitment to move forward from the stalemate “No peace, No war”, in which both countries found themselves after the failed Algiers agreement of 2000. This agreement had put an end to the most important war in the Horn of Africa between 1998 and 2000 between the two countries.

However, the agreement was made possible, to a large extent, by the new political dynamics implemented after the election of Ethiopian Prime Minister Abiy Ahmed Ali. This dynamic was accompanied by structural reforms within Ethiopia, the cornerstone of which was the rapprochement with Eritrea, postponed for more than two decades, in order to work together for peace, development and cooperation in the region.

The Ethiopian prime minister, Abiy Ahmed, was awarded the 2019 Nobel Peace Prize for being the architect of the astonishing reconciliation between his country and Eritrea and of reforms that aim to strengthen this African country in a radical way, punished by the armed conflict for many years.

Abiy received the prestigious award for his key role in ending a long war between Ethiopia and Eritrea that claimed more than 70,000 lives, and for his efforts to bring about peace and international cooperation, particularly for his decisive initiative aimed at resolving the border conflict with Eritrea.

Although some thought that his chances of winning had been reduced by the increase in ethnic violence and the thousands of displaced people in this region the previous year, he finally won this prestigious award for his efforts to achieve peace with Eritrea.

The award was a boost for the diplomat, who expressed his gratitude for this award and to all the actions that work for peace and reconciliation in Ethiopia and in the East and North African regions.

Since taking the reins of Africa’s second most populous country in April 2018, Abiy Ah-med began a rapprochement with the neighboring country, formerly an Ethiopian province. Some six months after his entry, in July 2018, he signed peace with Eritrea, thus ending 20 years of fighting.

Ethiopia read thousands of dissidents, lost to the state’s brutishness, and met members of exiled groups with open arms that his predecessors had accused of committing crimes. Abiy is probably the most educated political leader in the country, and his resume includes a doctorate, military experience, and the creation of the Information Network Security Agency (INSA), the African country’s spy service.

The Ethiopian Prime Minister was born on August 15, 1976 in Agaro, an area rich in natural resources and coffee – Ethiopia’s star export product – in the Oromia region (southwest), home to the country’s largest ethnic group, the Oromo.

He grew up in a multicultural family formed by an Amara mother – the other major ethnic group of the country – of Orthodox Christian religion and a Muslim Oromo father. Married with 3 daughters, Abiy is fluent in English and Amharic (the country’s main language), Oromo and Trigrinya. It was these mixed roots, together with his youth and the charisma of a leader that has won international opinion, the sign that brought hope to the population, who considered him the person who could lead the longed-for national unity after years of constant protests by Oromo and Amaras.

More about reconciliation between Ethiopia and Eritrea: