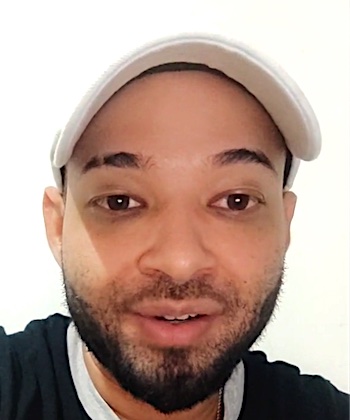 “Hello! My name is George from the United States. I will like to give out some information about my goosebump moment. It was when I was 16 years old and I was watching the FIFA World Cup in a match with Brazil vs Ghana when Ronaldo, the Brazilian, scored his 15th goal which made him hold the world record as a top scorer in this championship and it was amazing because he received a through pass by Kaka, another Brazilian player and then he ran through the goalkeeper and did the step over move, particular for the Brazilian, and then he passed the goalkeeper and scored the 15th goal. That was amazing because he is one of the best of all time.”

One of the greatest players of all time

The Brazilian star Ronaldo needed only five minutes to score his 15th goal at the World Cup. He received a pass from Kaka’s circle, bicycled past Ghana’s goalkeeper Richard Kingson and fired into an empty net despite defender John Pantsil’s desperate attempt to keep it out.

It was at the 2006 FIFA World Cup when Ghana was helplessly witnessing the exploits of Ronaldo, who overtook Gerd Müller to become the all-time top scorer in finals of this tournament.

Ronaldo is one of the greatest players of all time. The mere sight of his name in his team’s squad during his heyday was enough to strike fear into the hearts of defenders around the world.

In the 18 years of his professional career, Ronaldo Nazario managed to become one of the greatest goal scorers in the history of soccer. There were many memorable moments and one of them happened precisely on June 27, 2006.

Almost 5 minutes into the game, Ronaldo received a long pass from Kaka. He was alone in the attack, advanced towards the goalkeeper and outwitted a defender to score his 15th goal in the greatest World Cup. Brazil ended up winning that game 3-0, but his performance in the Cup did not go much further.

In total, Ronaldo scored 3 goals in the 2006 World Cup in Germany: 2 against Japan and 1 against Ghana. At that time, he was playing for Real Madrid.

The player was coming from a great controversy due to his excess weight, adorned with different health problems, such as blisters on his feet because of his boots, feverish processes, and dizziness. But none of that could overshadow his great talent, ratifying his nickname.

With that record in his pocket, Ronaldo surpassed great stars such as Gerd Mueller, Pelé, Just Fontaine, Sandor Kocsis and Juergen Klinsmann. The 15 goals were scored in 3 World Cups: 4 in France 98, 8 in Korea-Japan 2002, being also the top scorer of the tournament and the 3 in German territory.

The story behind the legend

On September 22, 1976, Ronaldo Luis Nazario de Lima, who in just a few years would be better known as Ronaldo, was born in Brazil. Skilful, creative, balanced player, he had in his legs the romance with the goal, but not entirely. Perhaps the only person who can truly say that he did not become better because of his knees, those injuries that kept him away from the courts at an early age and deprived him of his magic for more seasons.

It all started in his native Brazil, when after his brilliant time with the U-17 national team he scored 59 goals in 57 games, a statistic that earned him a contract with Cruzeiro, a team where he forged his skills and which would end up taking him to the senior national team, with which he would win his first World Cup in USA 1994, winning the final against Baggio’s Italy in a frenetic penalty shootout.

Belonging to the so-called “Galacticos”, Ronaldo won over the fans and managed to win the League, the Super Cup, and the Intercontinental Cup, scoring 104 goals in 177 matches. His physical form began to deteriorate, and the magic was not the same. After 5 seasons with Real Madrid and few titles, the Brazilian arrived at the 2006 World Cup in Germany, where, despite not having won the coveted title, which would mean his third, he managed to make the headlines when in the round of 16 against Ghana, he scored his 15th goal, which made him the top scorer in World Cups.

Ronaldo, or as he was better known, “Phenomenon”, for his incredible ability and romance with the goal, unbalance with the defenders, who won the affection of rival fans and who was considered an idol in all the teams he played for, arrived in Milan with more fears than illusions. It was February 13, 2008, the date that changed everything. “Phenomenon” suffered the injury he was so afraid of, the knee, and this time it was the left one, the one considered good. Same injury, different knee, 1 year of recovery. This injury earned him his contract with the Rossoneri team, with which he signed his worst scoring quota in Europe, only 9 goals.