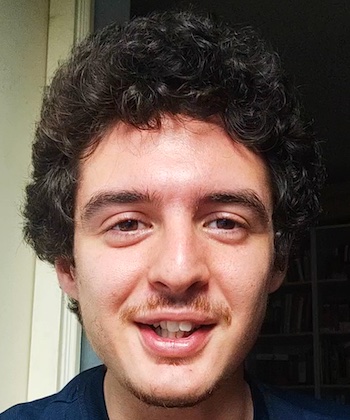 Xander: “I am from Malaysia. My goosebump moment is the scene where Matt Damon essentially rides the rocket into space to reconnect with the team that stranded him a year ago. The whole thing is insane to me, it brings a tear every time. Human ingenuity, perseverance, the fact that they came back to get him. It all amounts to one rocket launch where he knows everything is going against him, but he just perseveres. Even when he thinks that he’s at the very end of it, things start going wrong for him even more and you’re just like “oh it’s tense”, and then they finally catch him drifting out in space and there’s a human moment where they just look at each other “I got him”. Goosebumps, every time.”

“The Martian” is a film by Ridley Scott that adapts Andy Weir’s book about the first manned mission to Mars, the red planet, and one crew member, Mark Watney, who is accidentally abandoned on its surface.

Watney’s ingenuity and survival are mixed in this feature film with Hollywood drama and comedy, which makes it entertaining and keeps the viewer on the edge of their seat to find out what will happen to the “Martian”.

Undoubtedly one of the most shocking and emotional moments is when Watney is rescued by Commander Melissa Lewis, who uses a backpack propelled by pressurized nitrogen gas to approach the astronaut’s spacecraft but is unable to reach him. Watney, however, punctures the glove of his suit and uses the escaping jet of air as a miniature rocket to get closer to Lewis. The crew is reunited and crowds around as the world celebrates the news.

Curiosities of the movie

In “The Martian” we see actor Matt Damon portray Mark Watney, who draws on his wit, humor and spirit of survival to survive and find a way to communicate to Earth that he is still alive. Meanwhile his former companions embark on a daring mission to save him and bring him back home.

The production of this film, which was released in 2015, obtained permission to film rocket launches at Cape Canaveral, including that of the Orion in December 2014, a next-generation spacecraft designed to carry people into outer space as a first step toward Mars exploration. The Orion was sent into orbit with a tribute to Ridley Scott.

During the design of the spacesuits for the film, they discovered that many of the actual NASA suits for Mars missions looked “exactly like a Buzz Lightyear suit” because of how bulky they were. This amused Ridley Scott himself, so the final suit designs were based on images of real suits but made a little more practical.

Visual conception of “The Martian”

From the point of view of the visual conception, Mars is a real spectacle thanks to the photography of Dariusz Wolski, who expresses the possibilities of the reddish planet recreated in the Jordanian desert with the pink sand of Wadi Rum and is the ideal enclave to give us an idea of what the surface of Mars would be like.

Another of its strong points is Harry Gregson-Williams’ soundtrack, which together with the compilation of musical themes by Donna Summer, ABBA or David Bowie brings the space manoeuvres come to life and makes up a brilliant whole with the imagery.

Its apparent simplicity is its greatest virtue as it manages to keep us glued to our seat, enjoying every moment.

The main shooting of “The Martian” began on November 8, 2014, in Budapest. The splendid central European capital has become famous for hosting a long list of high-budget Hollywood films due to its beautiful scenery and experienced local crews. But what really attracted the film producers to the city were the soundproof recording studios of Korda Studios.

Korda’s Stage 6, supposedly the largest in the world, was ideal for constructing a Mars landscape that included the aircraft’s habitation and takeoff site. The scenery was used primarily for dialogue scenes, the interiors of the habitat, and the giant sandstorm sequence.

Although most of the Mars sequences were shot indoors, the panoramic view scenes were shot in the landscapes of the Wadi Rum desert in Jordan, as it is the oldest on Earth, about 80 million years old, and the eroded profiles are conducive to photography.

Wadi Rum is strikingly like Mars in its reddish-orange tones and the aim was to achieve a seamless integration of the scenery and visual effects of the location.

More about “The Martian”: