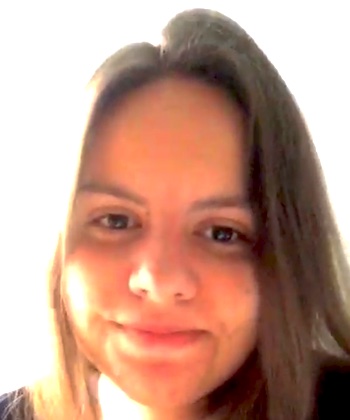 Lina: “Hello, I come from Colombia and my goosebump moment was the first time that I visited New York City and went to Broadway. It was like the highlight of my life. Since I was a little kid, I always dreamt of seeing a Broadway show live, and I had the opportunity of doing that a few years ago when I visited after my graduation from high school. So, that would be my goosebump moment, and it was really beautiful because it was just like I dreamt it, just like I imagined it. So I cried, and I got really red, and everybody was watching me like “What’s up with that kid?”, but I did not care, I was super happy. So that would be my goosebump moment.”

One of the world’s most famous sceneries

Broadway theaters offer a variety of shows, all of them are musicals and many of the world’s great stars have walked its stages at one time or another. Musicals are the main course offered by Broadway, where they stand out for their spectacular scenery, dazzling costumes, music and dances of the highest quality.

Broadway, the epicenter of theater

Broadway is the largest musical theater reference that exists, being considered the most important theater district in the world. Its 40 theaters located throughout this area in Manhattan generate more than one billion dollars every year with the sale of tickets to more than 10 million spectators. The tradition dates to the early 19th century and is directly related to New York’s urban design.

The first piece of musical theater was “The Black Crook”, first presented on September 12, 1866, at the iconic Niblo’s Garden, an old 3200-seat Broadway theater. The staging captivated audiences with 474 impressive performances. The style had influences of ‘Operetta’ from Germany, France, Venice, and English comedies.

At that time, the pieces still had very little planning and gave more prominence to the actors than to the development of the story. Little by little the shows evolved until “Show Boat” arrived, with which for the first time a production approached the concept of today’s musicals – with total harmony between plot and acting.

It is considered the golden age of the musical that began with “Oklahoma” in 1943. It followed other productions that became true classics of musical theater.

Today, the theater district stretches from 40th St. to 53rd St. They are part of the heart of Manhattan and one of the most interesting areas of the city.

The theaters and billboards in Times Square form a sea of color and neon lights, keeping alive Broadway’s reputation as home to the best musical shows in the world.

Whether it’s old titles or brand-new works, Broadway will always offer something for everyone, and the level of excellence is what keeps it the one and only Broadway year after year.

You can even see musicals with audio guide in Spanish because it is one of the most coveted attractions for tourists from all over the world. We recommend you book your tickets for the shows in advance and online before traveling.

More about a live Broadway show: