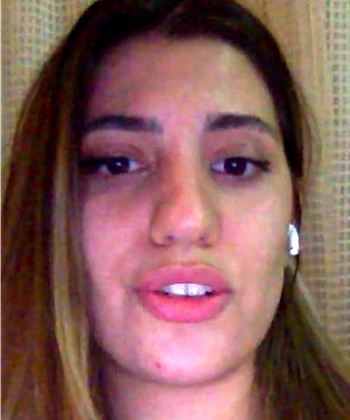 “Hello! My name is Seljan and I come from Azerbaijan. My goosebump moment happened when I was feeling very low, I had lost my hope in everything, and I was feeling very sad. It was night, I was sitting in my room, watching the sky which was black and there was not even a star. At this moment I thought to myself that I need a sign that will motivate me and help me to find the energy to fight. I asked the universe for a sign that eventually everything will be good. And can you imagine? At the same moment I saw a shooting star. So, this was my goosebump moment. And I have understood that there is always hope.”

Seeing a shooting star has a deep spiritual meaning in many cultures today. You will be told to make a wish every time you see one in the sky.

It is said that whatever you wish for will come true. It is considered a good luck charm. The symbolism of shooting stars changes with each region. For some people, it is the sign of a good beginning, while others take it as a symbol of the end.

If you manage to see a shooting star in the sky you should immediately make a wish, says an old superstition. They are related to good luck because it is not so easy to witness one of them since they move quickly.

In the past there was not much knowledge about these celestial phenomena, nowadays astronomers have explained that they are meteors that enter from space and heat up as they pass through the Earth’s atmosphere causing its characteristic brightness.

Many years ago, their luminous trail made us think that they were something magical and even in our era they are special for those who spot them because they mean fortune.

Why do we wish upon shooting stars?

Making a wish on a shooting star is a superstition that has been passed down from generation to generation for many years. In ancient times, stars were associated with divine beings, and many people even thought they were angels.

You have probably seen a shooting star and made a wish. On a starry night in a clear sky, shooting stars can be seen, especially at certain times of the year. But what is a shooting star? Can it be harmful? Where does it come from?

A shooting star (or meteor, which is the same thing) is a small particle (usually between millimeters and a few centimeters). Entering the Earth’s atmosphere at high speed, they “burn” due to air friction (in fact, the brightness is caused by ionization) and produce a luminous trajectory that passes quickly across the sky, which we call shooting star.

Their appearance is very diverse. They can shine very brightly or dimly. Their trajectory can be short or long. Some leave a bright trail for a while, while others do not. They are usually very fast.

But some are very slow and can last for a few seconds. Sometimes they show some colors: reddish, greenish, blue, etc. Depending on the chemical composition of the meteors. The origin of these particles is in comets, and comets lose their material and leave it behind.

If the particle is very large, the shooting star will be very bright, called a fireball. What we see are balls of ionized air surrounding them. The brightness of the cars is spectacular, making them look more beautiful even during the day.

Some may break up in their trajectory, show flashes or small explosions, or make sounds. They often leave a continuous trail (this is the trail of ionized air they leave) or smoke. Sometimes they can be bright enough to be seen behind the clouds, so we can sometimes see the clouds illuminated for a moment.

When can shooting stars be observed?

Shooting stars can be observed on any clear night, although on certain nights of the year, they are more abundant and atmospheric friction can burn meteors weighing several kilograms. However, if the particle is too large, it may not be able to decompose completely and reach the earth’s surface. Then the meteor is called a meteorite. Our planet has been receiving meteorites of microscopic and even larger sizes.

One of the biggest meteor showers is the case of the Perseids, popularly known as St. Lawrence tears. Where we can see them in the skies in mid-August with greater probability.

If you want to see a shooting star, you must consider some recommendations such as leaving the city at night and look for an observation point in the countryside where the sky is completely clear and there is no or minimal light pollution.

One of the biggest problems today to see the starry sky is the light pollution caused by cities. We must consider that the existence of artificial lighting inhibits the night sky. Therefore, if the city where we live is very populated and bright, we will have to move far enough away so that we are not affected.

It is important that the sky is completely clear, since if there are clouds in it we will be able to see the stars. It is not very advisable to see shooting stars during full moon nights. This is because the reflection of the full moon can also cause light pollution and may obscure the view of other stars closer to it.

Neither binoculars nor telescopes should be used. Direct observation is much more effective when done with the naked eye and once your eyes get used to the darkness and starlight.