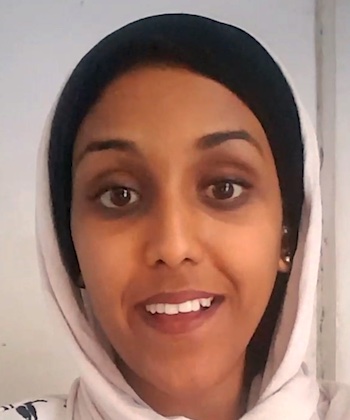 “Hello! I am Reem Mohammed. I am from Sudan. I am going to talk about the hyenas that I saw last time in front of my home. Even though we were scared, we were also amazed. They’re really large and dog-like animals and they have lower hind quarters. Their back legs are smaller than their front ones and they have high whiskers. Their back is sloppy and also their eyes have a light, blue light and it’s really amazing. And also their skin is brown, light brown and black. They are really awesome creatures and it’s a really amazing experience for me and it’s definitely a goosebump moment.”

Although hyenas look like dogs, they are more closely related to cats. Despite its bad – albeit true – reputation as a profiteering scavenger, the hyena is an animal whose physical characteristics are made for hunting, and it often does so. In the African savannah it is capable of catching wildebeest, antelopes and some birds and snakes.

They are usually nocturnal animals, with very good hearing and vision, and great agility due to the claws on their feet, which allow them to tear off and run at high speed. They hunt in groups, isolating their prey and chasing it among all the members to compete for the trophy. One of their best-known characteristics is their famous “laugh”, a type of howl or moan that they emit frequently. They are organized in large herds called clans that can include up to 80 individuals and are led by females.

Over the centuries, hyenas are said to have the souls of the damned trapped inside them, and now when a clan is on the hunt, calling and screeching at each other, they effectively sound like cackling.

In addition to this, female spotted hyenas have very particular genitalia that outwardly resembles that of a male. This shocks many modern ethnic groups who fear this belief as they see it as a sign of lawlessness or the work of the devil.

Evidently, hyenas have  been considered vulture-like and hideous slanderers for quite some time. However, they are skilled hunters and organize themselves into clans to take down prey as large as zebras. Most clans hunt and kill most of what they eat, however, like each animal on the African plains, they steal from anything that is not immobile.

Although zoologically classified in their family, hyenas share certain tendencies with felines and canines. Just as dogs hunt by executing their prey and holding on with their mouths, not their paws. Also, like felines, they groom frequently and make scent marks to limit their territory.

Hyenas possess evidently striking teeth. They are short, powerful canines that are on display on the face specifically at the front of the jaw, and in the back at the back of the jaw where they can exert the most impact, are huge butchering molars, which pulverize the entirety of prey skeletons as big as a wildebeest. Consequently, the bone material is consumed, and the hyena droppings have a chalky white color.

According to studies carried out by paleontologists, humans were part of the hyenas’ diet thousands of years ago.

It is currently stated that instead of attacking, they prefer to stay away, however, herd behavior plus the need for food may generate different reactions. Hyena attacks on people are not common, but several cases have been recorded where children are the main victims.

On the other hand, hyenas are used for human food and for medicinal purposes, this occurs in some Muslim regions.

The ancient Romans and Greeks believed that some body parts of hyenas were used to ward off evil and attract love and fertility. This belief is still current in certain parts of the world.

More about the hyenas: