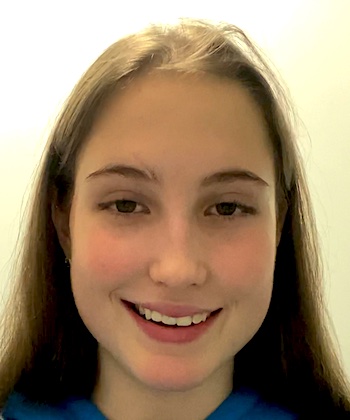 “Hi! I am Tara and I come from Slovenia and my goosebump moment was back in 2017, on the 17th of September, when our national team won its first ever Eurobasket Championship. They won in the finale against Serbia and that was such a great and big important moment for us all because by then, we really never were the best at something and because we are a very small country, we did not even believe that we could be the best at something. And I guess seeing that it can be done and that it also was done gave everyone a new perspective on everything. Especially me, as a young basketball player, it really inspired me to keep on working hard and working towards my dreams because I can achieve anything that I put my mind to.”

The Slovenian national team was proclaimed champion of Eurobasket 2017 after winning all the matches, not only of the championship, but also of the qualifying tournament, 16 out of 16 in total.

In the final, Slovenia won against Serbia by 93-85. The team led by Igor Kokoskov gave a whole lesson of character, pride and courage, especially in the last and decisive minutes.

With three minutes to go, Slovenia saw Serbia come back and tie the game (80-80) and found its two big stars, Luka Doncic and Goran Gradic, injured on the bench.

Slovenia survived heroically with a quintet composed of secondary players such as Prepelic, Randolph, Nikolic, Vidmar and Blazic.

Serbia, which had even managed to get ahead on the scoreboard (77-78, m.35) was extremely pressured and began to miss shots in the face of Slovenia’s stubborn defense, especially by Bogdan Bogdanovic, who took responsibility in those moments, but was not accurate. In short, it was a small basketball miracle to crown a country where basketball is almost a religion.

After Basketball at the Olympic Games and the Basketball World Cup, it is the most important tournament for European national teams.

Until the 2015 edition, the competition also served as a qualifying tournament for the Olympic Games and the FIBA Basketball World Cup, changing from 2017 the system to one in which all teams must face each other to achieve their place in those tournaments.

In addition, the European Championship also served the continent’s teams as a qualifier for the FIBA Diamond Ball (while this was played between 2000 and 2008), which brought together all the continental champions from around the world, in the style of a Confederations Cup.

The most successful nation is the now defunct Soviet Union with fourteen titles, while in recent times the most successful team is the Spanish national team, three-time European champions in 2009, 2011 and 2015.

More about the European Basketball Championship: