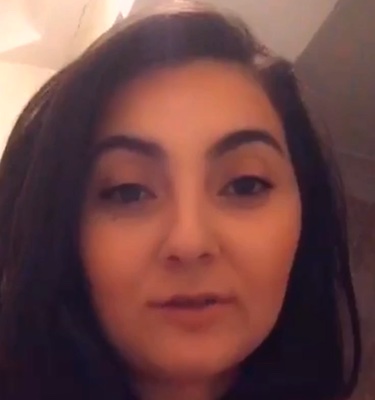 Vusala: “I am from Azerbaijan. My goosebump moment was when I visited the Stephansplatz at the geographical center of Vienna. It is a square surrounding Stephansdom, the huge cathedral that dominates the pedestrianized area of Vienna’s heart. The cathedral dates back to the 12th century and it’s a treasure trove of secrets. I was extremely fascinated by the scene that I saw inside the church. I was shooting with a professional camera. Therefore, it needed no spotlight to banish the shadow, no lamps to light up the mystical darkness of the ceiling. However, some pieces of modern architecture can be seen in Stephansplatz as well. It was one of the examples of how old and modern architecture can mix harmoniously.”

The most important religious symbol in Vienna

St. Stephen’s Cathedral (Stephansdom), in the heart of Vienna, is the main seat of the archdiocese of the city and its most important religious symbol. It was built on the ruins of a Romanesque church dedicated to St. Stephen built in 1147. Now only the Giant’s Gate and the Pagan Towers remain from the old temple.

The cathedral is crowned by a large spire-shaped tower (Steffl) built in Gothic style which, with its 137 meters high, can be seen from different points of Vienna. After an arduous climb up a spiral staircase, from the tower’s observation deck you get a beautiful view of the city center that leaves more than one of us with goosebumps.

What is inside Stephansdom?

Inside the cathedral you can see different architectural styles from different periods; the central nave, the side chapels and the choir come from one of the reconstructions made in Gothic style and some of the side buildings were rebuilt in a Baroque style.

The interior of the cathedral houses the mortal remains of many of the members of the Habsburg family and was the wedding and funeral place of the magnificent Mozart. The Stephansdom accompanied Vienna for much of the city’s history, as the foundation stone dates to 1137.

This original 12th century church no longer exists. The present incarnation has its origins in the mid-13th century. The main entrance door, for example, dates from that time. Over the years, various towers, additions and other elements were added to create the current functioning Gothic building, with its sprinkling of Baroque features.

Amazingly, Stephansdom survived the air raids of World War II, only for a fire in nearby buildings to spread to the cathedral in April 1945, destroying parts of the building.

At the back of the cathedral you can see the Tile Roof, made up of more than 250,000 tiles that had to be restored after being seriously damaged during World War II. On the right side of the cathedral there is an entrance called the Singers’ Gate, which could not be used by women.

Home to many statues

Stephansdom is home to many statues, one of the most interesting of which is known as Christ with toothache. This religious representation received its nickname when three men noticed the way the figure’s head was tied with a cloth to prevent the crown of thorns from coming off in the wind. They laughed and joked that it looked like Christ had a toothache.

When they returned home, one of the men was suffering greatly from a terrible toothache. He went to the doctor, who could do nothing for him. Making a connection with what had happened the night before, the suffering man returned to the cathedral and asked Christ for forgiveness. Within an hour, his pain had completely subsided, and the statue received its new nickname.

What events and tours does St. Stephen’s Cathedral organise?

One of Austria’s proudest historical monuments, St Stephen’s Cathedral is an incredible sight to behold and the most impressive of the churches in Vienna. Open year-round to the public, the cathedral hosts many events throughout the year, including its popular Christmas Concerts. Various guided tours in English are available, and it is one of Vienna’s most popular landmarks, attracting over one million tourists every year.

More about Cathedral of  Vienna: