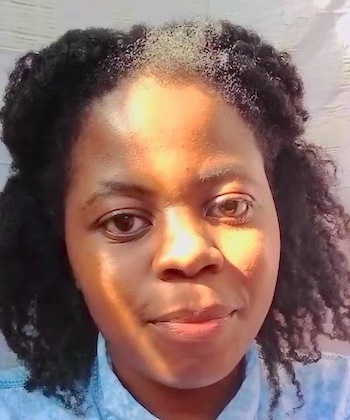 Chimoso: “Hello! I am from Malawi. I remember my goosebump moment was when I watched “Black Panther” for the first time. I remember seeing all the way the cultures, the clothes, the hair were represented according to different African cultures, tribes and ethnicities and stuff like that. I just remember seeing Chadwick Boseman and, you know, all the other actors representing all the black people and just feeling seen and heard and just feeling so proud to actually…be black! To be in this skin and to feel represented on a big screen. We are so used to seeing non coloured people being superheroes, but this was a time for a black person to be a superhero.”

“Black Panther” is terrific entertainment that also reminds us that there can also be good movies beyond their visual spectacle. Several themes are addressed that help the film better connect with an African American audience who didn’t have a superhero to identify with.

This film works on human emotion by going a step beyond pure entertainment, it becomes a joy to watch. Also thanks to its great soundtrack, everything in this movie is unique within this universe and fits perfectly.

“Black Panther” is a 2018 American superhero film based on the Marvel Comics character Black Panther. Produced by Marvel Studios in collaboration with Fox Searchlight Pictures and distributed by Walt Disney Studios, it is the eighteenth film in the Marvel Cinematic Universe (MCU).

The film is directed by Ryan Coogler, who wrote the screenplay with Joe Robert Cole, and stars Chadwick Boseman as T’Challa / Black Panther, along with Michael B. Jordan, Lupita Nyong’o, Danai Gurira, Martin Freeman, Daniel Kaluuya, Letitia Wright, Winston Duke, Angela Bassett, Forest Whitaker and Andy Serkis. In “Black Panther”, T’Challa is crowned king of Wakanda after the death of his father, but his sovereignty is challenged by an adversary who plans to abandon the country’s isolationist policies and start a worldwide revolution.

Wesley Snipes expressed interest in working on a “Black Panther” film in 1992, but the project did not come to fruition. In September 2005, Marvel Studios announced a film of the character as one of ten based on Marvel characters and distributed by Paramount Pictures. Mark Bailey was hired to write a script in January 2011.

“Black Panther” was announced in October 2014, and Boseman made his first appearance as the superhero in “Captain America: Civil War” (2016). Filming took place between January to April 2017, at EUE/Screen Gems studios in metro Atlanta, and Busan, South Korea.

With Chadwick Boseman we learn more about the whole Wakandan mythology and see what his first steps as monarch are like, while Michael B. Jordan manages to endow his villain with real emotional power, even if it’s not entirely fair to label him as such.

The latter is very unusual for Marvel, as for example in “Thor: Ragnarok” they had the chance to do something similar with Cate Blanchett’s Hela, but when it came down to it, they preferred to focus on the comedy away from her by focusing on Thor, Hulk and, to a lesser extent, Valkyrie. In “Black Panther”, Michael B. Jordan’s presence goes in crescendo, developing his motivations well and getting to talk about a peculiar view of imperialism and colonialism that adds more background to the film.

All this is reflected through a top-notch visual finish that allows to bring Wakanda to life in a dazzling way, thus managing to differentiate it even more from the rest of the Marvel productions. In fact, its great point of contact with the rest is through two characters that until now had been of minor importance, those of a very inspired Martin Freeman and Andy Serkis.

Black Panther’ triumphs on all levels

The film received critical praise for its direction, costume design and soundtrack, although the computer-generated effects received some criticism.

Many considered it one of the best films in the MCU and noted its cultural relevance, and both the National Board of Review and the American Film Institute chose it as one of their top 10 films of 2018, among many other organizations.

The film received numerous awards and nominations, with its seven nominations for the 91st Academy Awards, including Best Picture, with awards for Best Costume Design, Best Score and Best Production Design. “Black Panther” is the first superhero film to receive a Best Picture nomination, as well as the first film in the MCU to win an Academy Award.

The movie also received three Golden Globe Award nominations, two Screen Actors Guild Award wins and twelve nominations at the Critics’ Choice Movie Awards (three wins), among others. Coogler will return to write and direct the sequel, which is currently in development.