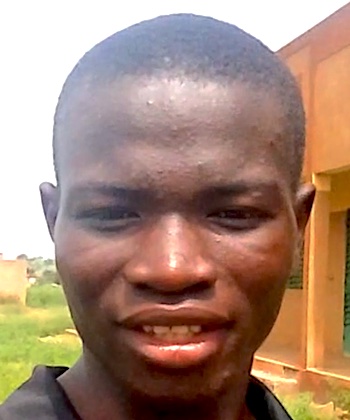 Bruno: “Hello! I am from Burkina Faso. My goosebump was when I watched the Daltons cartoon series. In episode 162, the four prisoned Dalton brothers stole a magic necklace that can be used to transform everything into gold. They used it to get the keys of the penitentiary and escape. However, Averell, the Dalton who wore the magic necklace could not remove it from his neck and people were running after them. And Averell, who was scared, unintentionally transformed two of his brothers Jack and William into gold. Therefore, Averell and Joe had to run to the necklace owner who removed it from Averell’s neck. This episode was very interesting and funny. I couldn’t stop laughing when I watched it.”

A plan to escape

The Daltons are the genius convicted outlaws and self-confessed characters of a cartoon television series created by Belgian cartoonist Morris in which brothers Joe, Jack, William and Averell are locked up in a maximum-security prison in Nevada.

In almost every episode, Joe devises a plan to escape, but they always fail miserably by mistake, necessity, misfortune or because Averell or the dog Rantanplan ruin Joe’s plans with stupid ideas and they always return to the penitentiary. Undoubtedly, it is a super funny series that gives goosebumps to many people.

All about the animated series

This French cartoon TV series was co-produced by Xilam and Dargaud Media, and aired since May 23, 2010, in France. The series has a total of 195 episodes and is based on the four Dalton brothers, recurring enemies of Lucky Luke, who must take it upon himself to capture them, only for the ineptitude of their guardians to allow them to escape again.

All the brothers have the same appearance, the same mustache and the same bulbous nose, differing only in their height, which is inversely proportional to their age, wickedness and intelligence.

Joe, the eldest, fanatically hates Lucky Luke and is the brains of the family. On the other hand, Averell, the youngest and tallest, rivals Rantanplan in terms of stupidity and, like Rantanplan, lives for food.

The series has been broadcast in several countries around the world; in addition to France, its country of origin, Italy is currently the only country that has broadcast all the episodes.

The true story of the Dalton brothers began in 1888, when Frank, the eldest of the 13 children of the Dalton couple and deputy sheriff of Coffeyville (Kansas), was killed in a shootout while pursuing a dangerous horse thief.

Three of his brothers decided, as an act of revenge, to take orders from the local authorities and fight crime in that state.

Grattan, Bob and Emmett Dalton dedicated themselves to pursuing the evildoers that roamed those lands, but in little more than a year they were tempted to commit a series of crimes that would make them become the persecuted ones.

The real Daltons, at least from the point of view of the newspapers of the time and the history books, were more like lethal outlaws on a par with Jesse James and his henchmen. Criminals who became infamous for their continuous attacks on trains loaded to the brim with gold and banknotes. However, the Daltons became famous thanks to comic books and the small screen.

More about The Dalton cartoon series: