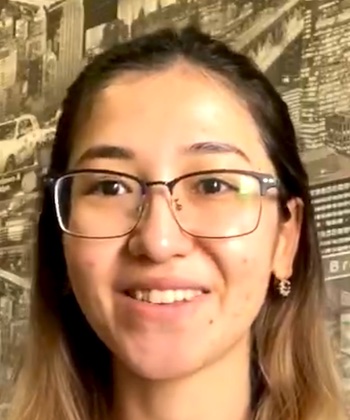 Shasenem: “I am from Turkmenistan. My goosebump moment was the trip to Darvaza in the middle of Karakum Desert or in other words they call it “The Door to Hell”. That was really impressive because this gas crater has been burning for almost 50 years and people don’t know how long it will continue to burn. So, I went there as a tourist with my friends and that was really amazing because of the thrill of that gas crater, the thing that was burning. It is impossible that man can ever do that. It is mother nature that creates that. I would recommend putting that trip to gas crater on a bucket list for whoever wants to come to Turkmenistan, whoever wants to travel because it is a must-see thing. It feels like a real scientific movie. It does not feel like a real thing. That is really cool and amazing. Thank you very much.”

There are places on Earth that surprise us by their natural beauty and the spell they exert on those who admire them, and other corners whose peculiarity manages to awaken opposing sensations and feelings. In this last category is included the Darvaza pit, an artificial crater in the middle of the Karakum desert in Turkmenistan, whose fire has been burning uninterruptedly for almost 50 years.

This place, with its amazing colours in the middle of nowhere, is known as “The Door to Hell”. This unique smoking hole, which reaches 69 meters in diameter and is 30 meters deep, is one of the main attractions of the area.

How did a fiery inferno form in the middle of a desert in Turkmenistan?

The Darvaza crater, also known as “The Door to Hell”, is an ancient gas prospect located in the Karakum desert near the small village of Darvaza in Turkmenistan. The desert, which covers 70% of the country or 350 000 km², is very rich in oil and natural gas.

This well has an inside temperature of 400°C and was created following an accident in 1971 during a gas exploration work by Soviet geologists, who saw their equipment and tents being swallowed up by the earth. In reality, they had discovered a subway cave full of natural gas.

In order to mitigate the effects of the spread of methane in the surrounding area and fearing that the crater would cause the escape of several dangerous natural gases, the authorities decided to set fire to it, a measure they believed would put an end to the problem in a short time. However, their calculations did not take into account the amount of gas accumulated underground.

They estimated that it would be extinguished in a few days, but it has been burning for half a century, despite failed attempts to extinguish the fire. Since then it has been burning non-stop and provides an impressive spectacle keeping the crater turned into a surreal bonfire in the middle of the Karakum, like a place from another planet.

That is why the desert and the pit have become a tourist attraction, even though it is in an area that is difficult to access in a country that maintains entry restrictions. Foreigners wishing to visit “The Door to Hell” can do so by booking a tour on site or as part of an organised trip to the region.

When will “The Door to Hell” be extinguished?

The Darvaza gas crater is a hole in the desert almost seventy meters in diameter. There is absolutely nothing around it for ten kilometers, or even for a hundred kilometers, except the village that gives it its name and the road and railroad that go to Uzbekistan.

By day it is striking for its vastness and its apparent meaninglessness. A huge gap in the middle of the deepest and most distressing of swims. But if it is impressive by day, it is disturbing at nightfall. In the hours before the sun disappears below the horizon, the crater acquires the consistency of the gates of hell, highlighting the light of its flames in the increasingly prevailing darkness. When the natural light disappears, silence and darkness are broken by the flames of the crater.

No one knows for sure when it will be extinguished, but it is more than likely that The Darvaza gas crater will continue to burn for decades.

One of the most uninhabited territories on the planet

The Karakum Desert covers 70% of Turkmenistan’s territory, with a total area of over 350,000 square kilometers. It is one of the largest deserts in the world and one of the most unpopulated territories on the planet, as well as the most important in Turkmenistan and Central Asia.

In the middle of the desert lies Darvaza, a tiny village of just over three hundred inhabitants about five hours’ drive north of the Turkmen capital, Ashgabat. Remarkably close to the village is one of the most disturbing wonders known to man.

More about The Darvaza gas crater: