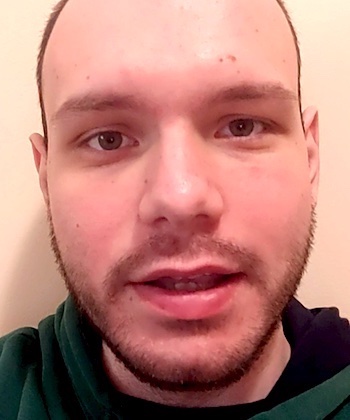 “Hi! My name is Vuk and I come from Serbia. My goosebump moment is about the Dota 2 world championship of 2018, the grand finals game 4 of OG vs LGD. From the OG player Ana made a clutch decision that only lasted 5 to 10 seconds and the whole Dota community was impressed later when that moment was analyzed. The whole team of LGD, 5 players, attacked Ana and he had to make multiple decisions in that brief window he had. He decided to sell his items, he decided to try to fool them with his illusions and he succeeded. Later on, that moment won them the game and it was a brilliant moment no one saw coming.”

The best-of-five grand finals took place between OG and PSG.LGD, with OG winning the series 3–2. While PSG.LGD earned an direct invite to the tournament by finishing third in the 2017–2018 Dota Pro Circuit standings, OG earned theirs by playing through and winning the European open qualifiers, which they were required to do per tournament rules following a roster shuffle after three members, Tal “Fly” Aizik, Gustav “s4” Magnusson, and Roman “Resolut1on” Fominok left the team in May 2018.

Following their win at the European qualifiers, OG were then placed into group A, finishing fourth with a record of 9–7, which seeded them into the upper bracket. There, OG won every series to advance to the grand finals. Facing the lower bracket winner PSG.LGD in it, whom OG had just defeated in the upper bracket finals, OG won the game one, but lost the next two games. Needing another win to avoid losing the series, OG forced a late-game comeback in game four, and subsequently won game five, making them International champions and winning them over $11 million in prize money.

Their victory was considered a Cinderella and underdog success story, as they had come from the open qualifiers and had beaten some of the more favored and accomplished teams along the way. Their win also broke the historical trend of Chinese teams winning the International in even years. OG would also later win The International 2019 the following year, becoming the first repeat champion of an International.

The tournament was seen by over 15 million people online, with nearly 20,000 attending the matches at the Rogers Arena. The tournament, alongside OG’s upset win over PSG.LGD, were respectively nominated for “best e-sports event” and “best e-sports moment” at The Game Awards 2018 ceremony. An episode of “True Sight”, Valve’s documentary film series on the professional Dota 2 scene, was filmed during the event.

It followed OG and PSG.LGD during the grand finals, documenting a number of behind the scenes moments for both teams before and after matches. It was released online for free on January 15, 2019, and also premiered to a live audience, with members of OG as special guests, at the Palads Teatret in Copenhagen.

Dota 2 is a multiplayer online battle arena (MOBA) video game developed and published by Valve. The game is a sequel to Defense of the Ancients (DotA), which was a community-created mod for Blizzard Entertainment’s Warcraft III: Reign of Chaos.

Dota 2 is played in matches between two teams of five players, with each team occupying and defending their own separate base on the map. Each of the ten players independently controls a powerful character, known as a “hero”.

There are currently 122 possible heroes to choose from, each with unique abilities and differing styles of play. During a match players collect experience points and items for their heroes to successfully defeat the opposing team’s heroes in player versus player combat. A team wins by being the first to destroy the other team’s “Ancient”, a large structure located within their base.

Development of Dota 2 began in 2009 when IceFrog, lead designer of Defense of the Ancients, was hired by Valve to create a modernized remake for them in the Source game engine.

Dota 2 was praised for its rewarding gameplay, production quality, and faithfulness to its predecessor, with many considering it to be one of the greatest video games of all time.

It has been one of the most played games on Steam since its release, with over a million concurrent players at its peak. The popularity of the game has led to official merchandise and media adaptations for it being produced, including comic books and an anime series, as well as promotional tie-ins to other games and media.

The game also allows for the community to create their own gamemodes, maps, and cosmetics, which are uploaded to the Steam Workshop. Two spinoff games, Artifact and Dota Underlords, were also released by Valve. Dota 2 has been used in machine learning experiments, with a team of bots known as the OpenAI Five showing the capability to defeat professional players.

More about the Dota 2 2018 championship: