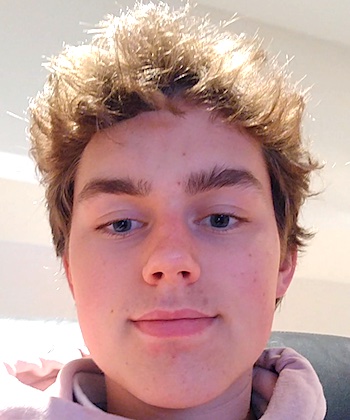 Alex: “Hello, I come from Belgium. My goosebump moment was about 5 years ago. It was the launch of the SpaceX Falcon 9 rocket. It was a live event on YouTube, so I watched it behind my screen. This was a big deal for the space industry, because we could finally land a rocket meaning we could reuse it. This means lower cost to launch rockets and seeing launches more often. Seeing a 500-ton object free-falling from the sky, being able to control and land itself was really an amazing feeling, even if I was watching it on YouTube behind my screen. The next thing I want to do on my bucket list is to go to the United States and watch a landing of the Falcon 9 rockets. This was my goosebump moment, thank you.”

The historic launch of SpaceX’s Falcon 9 rocket was the first manned mission in the country’s history to be operated by a private company. It is also the first flight with astronauts on board launched from U.S. soil in nearly 10 years.

After launch, the first and second stage of the rocket successfully detached, placing the Dragon capsule, in which the two astronauts were traveling, in the correct orbit to reach the International Space Station, the mission’s destination and considered the second critical moment.

This is how the Falcon 9 rocket was launched

In May 2020, SpaceX, the private rocket company of billionaire entrepreneur Elon Musk, launched two Americans into orbit from Florida on a mission marking the first NASA astronaut spaceflight from U.S. soil in nine years.

It was a truly historic launch, as for the first time, two astronauts left Cape Canaveral (in Florida, USA) aboard a private spacecraft. The spacecraft was designed to carry seven people and has touchscreen systems inside that the astronauts can activate even if they are wearing gloves.

In addition, it was launched from the same pad used by the last NASA space shuttle flight, piloted by Hurley, in 2011. Since then, NASA astronauts have had to climb into orbit aboard Russia’s Soyuz spacecraft.

The feat achieved by SpaceX and NASA represents a unique turning point in a space race in that for the first time a private company has succeeded in sending two humans into space.

This technical achievement is remarkable in many respects, but also for the software that governs SpaceX’s spacecraft and rockets. For example, the Falcon 9 is governed by Linux, has PowerPC microcontrollers and a triple redundancy system for decision making.

One of the keys to the system is the triple redundancy system to avoid any type of failure and to direct the decisions made by the software when controlling, for example, the Falcon 9 rocket.

Curiosities about the launch

The crew astronauts, who have flown the space shuttle twice in the past and spent 1,400 hours together in space, remained quarantined prior to the mission.

In addition, the Demo-2 mission, with Hurley and Behnken aboard, represented the decisive step toward certification for new missions that will carry astronauts to the orbiting station, starting with four: three men and one woman. Looking ahead, NASA sees an evolution of technology also in the direction of commercial spaceflight and private space stations. In short, Space X’s frontier is soon to be that of real tourism in space.

In fact, it is also said that the Crew Dragon, in a few years, could take us back to the Moon and maybe even for the first time to Mars.

How was SpaceX born?

The story of SpaceX began when Elon Musk decided to send payloads into space. His main idea was to send mice to Mars and then they could return.

At the beginning, the Space X company was a small business and many small satellites that already existed had a series of difficulties to be launched properly. This is where the story of SpaceX was born; a company that gained importance for trying to do things with greater speed even though their first attempts failed.

In 2008, the company realised that the small satellite business did not have a big future and decided to focus on the Falcon 9. From that moment on, they received a contract with NASA, which gave life to the company.

Between 2010 and 2013, SpaceX managed to launch capsules that would eventually take it to the International Space Station. Despite launching few rockets, it began to announce the use of reusable rockets.

After many attempts, on December 22, 2015, they finally achieved a successful mission landing a booster rocket. From this moment on, the company took a better position in the market and has managed to become known as a true leader in technology matters.

More about the Falcon 9 and SpaceX: