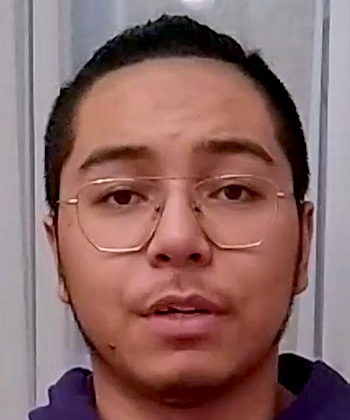 The magnitude of the universe – Maksat’s goosebump moment

Maksat: “Hey guys, I am Maksat Abdrazakov and I am from Kyrgyzstan. The most memorable goosebump moment in my life is the time when I realised how big is Universe is. If you think about this, we live in our solar system and we have 9 planets in it. We have not visited a lot of them. We’re trying to visit Mars, but it takes a lot of time, a lot of dedication, a lot of work. In fact, we have 5000 thousand other solar systems in our “Milky Way” galaxy. It is just crazy that we have around 100 billion different planets in our small galaxy and there is the possibility that there is life on one of the planets because 100 billion sounds like a crazy number, right? And it is not even the end of the whole Universe. That is the fact! We have around 200 billion or 2 trillion other galaxies (not planets) in the whole Universe. There is no exact number for that, but it is just so fascinating to just think about this. If we had more equipment, if we would have more time, better spaceships, we could travel through the Universe and make so many discoveries. You know, there is a possibility that there is a different life. Hopefully one day we will have better equipment and I will get to travel at least to one of the planets. It just feels so crazy. I can talk about this stuff for hours and I won’t get tired. It is just every time I speak about this, I have goosebumps in my body.”

The Universe encompasses everything known to man: matter, energy, space and time. The scales in the Universe are so large that we cannot even imagine them.

To give you an idea, for every grain of sand on Earth, there are a million stars, or more. Our galaxy is just one among hundreds of billions of galaxies.

How big is it?

The limit of the Universe visible from Earth is 46.5 billion light-years in all directions. That is a diameter of 93 billion light years. One light year is 9.46 trillion kilometers.

The calculation is enormous, and yet this is only the part of the Universe that we can see. After the Big Bang, the Universe expanded so rapidly that part of its light has not yet reached us, and so we cannot see it.

But if the Universe is only 13.8 billion years old, how can there be objects farther away? Is it possible that they have moved away faster than the speed of light? The answer lies in the inflation of the Universe.

We are not alone

To date, there hasn’t been any contact with any intelligent race that, deliberately or by mistake, has sent us any kind of signal. This apparent contradiction is known as the Fermi paradox, formulated by the physicist Enrico Fermi through the question “Where is the whole world?”

However, the Universe is everything we can touch, feel, perceive, measure or detect. It encompasses living things, planets, stars, galaxies, dust clouds, light and even time. Before the Universe was born, time, space and matter did not exist.

The Universe contains billions of galaxies, each with millions or billions of stars. The space between stars and galaxies is largely empty. However, even in places far from stars and planets, there are particles of dust or a few hydrogen atoms per cubic centimeter. Space is also full of radiation (e.g., light and heat), magnetic fields, and high-energy particles (such as cosmic rays).

But undoubtedly, the big question we humans ask ourselves is whether we are alone in the Universe. The universe is too big, and we know too little about it for this possibility not to exist. What we do not know is whether we will be the ones to find them or whether it will be the other way around.

We will succeed in exploring the Universe

We are expansive beings. Humans have always tried to go beyond limits, to explore new territories. Once we have surpassed the limits set by our own planet, we have to solve the next big question: “Can we live on another planet?”

This is a question that has its crux. We can think that if an astronaut has walked on the surface of the Moon with his space suit fifty years ago, why couldn’t we now walk on the surface of another planet and go shopping with our skiffs?

The answer to this question is simple. It is not so easy to find a place where we can settle for the long term. Space suits are fine, but only for a while. They must be supplied with water and oxygen to allow us to live, and these are resources that are not abundant on any celestial body. Besides, even if we were to find a planet with similar characteristics to Earth, it could be so far away that it would take centuries to reach it.

In any case, human curiosity and even the need to find an alternative to Earth, should it become uninhabitable, have already set us to work on this challenge.

More about how big is Universe is?