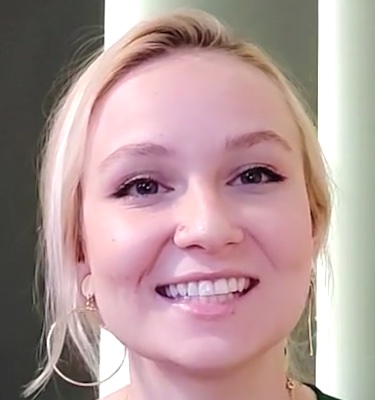 The movie "A Dog's Journey"

Anastasia: “Hello, I come from Estonia and my goosebumpmoment happened when I was watching a movie called “A Dog’s Journey”. It was in 2019 when I was living in London and as I’m the biggest animal lover, I just had to watch it. The movie is about a dog that finds its purpose through the lives of humans that he meets, and honestly, I cried every six minutes because of the way they placed the emotional scenes. But I thought it was such an honest picture of how life can be and how unconditional love can pull you through absolutely anything. And it was a nice mix of laughter and tears, obviously, sometimes tears of sadness, but obviously, it’s because it just touched my heart.”

A film that reaches the heart of any person

“A Dog’s Journey” tells the moving and surprising story of a loyal dog who finds the meaning of his own existence through the lives of humans who he teaches to laugh and love.

Based on author W. Bruce Cameron’s beloved best-selling novel, over the course of five decades an indefatigable dog travels a fascinating and encouraging path that reaches the heart of any person who has ever loved an animal.

While he reincarnates into the bodies of multiple canines over the years, it is his unbreakable bond with a soulmate named Ethan that transports and inspires a dog during his journey to find his child’s true purpose.

The story of “A Dog’s Journey”

In 1962, eight-year-old Ethan Montgomery and his mother rescue a Golden Retriever puppy from suffering in a very hot car. Despite Ethan’s father’s reservations, the family adopts the pup they call Bailey and a lifelong friendship develops.

Bailey is the sole responsibility of Ethan, who feeds, walks and trains his pup, and also teaches him unforgettable tricks along the way. When Ethan becomes a teenager, he finds his first love in the charming and generous Hannah (Britt Robetson from Tomorrowland), while remaining inseparable from his faithful Bailey.

Fresh from an injury that ended his soccer career and a devastating breakup with Hannah, Ethan is heading off to college to begin his next chapter. Since he cannot take Bailey with him, he has to leave his faithful companion at home. While away at college, old Bailey falls ill and Ethan arrives at the vet just in time for his final farewell.

Just when we think it’s the end of their bond, Bailey is reborn in the body of Ellie, a German K-9 sheepdog lifeguard for the Chicago Police Department. In fact, no one is more surprised by this twist of things than the shifting pup who knows he’s still Ethan’s best friend. Audiences will then learn of Bailey’s incarnations as a Corgi named Tino, then an Australian Sheepdog / Saint Bernard cross named Buddy.

While Bailey isn’t sure why his soul keeps coming back again and again for new adventures, he will discover that the purpose of his many lives is more crucial to his human friend than he could have ever imagined.

Is there unconditional love between humans and pets?

Anyone who has ever owned a dog knows that they have the capacity for the kind of unconditional love that is otherwise only seen between a human and their offspring.

The gentle nudge of a wet nose or a lick on the hand occurs unexpectedly when we are upset or depressed. The rush to the door to greet us is also a demonstrable sign of the strength of the human-canine bond, in particular. Our dogs or cats can perceive a subtle change in our behavior.

Dogs are the only species that, like a human child, run up to their human when they’re scared, anxious, or just plain glad to see us. It is also the only animal that actively seeks eye contact with people, and really wants to be with us.

Cats also come to us when we are depressed and will show that they are happy to see us with a lick on the hand or a soft purr to express their own feelings of satisfaction. Pets provide a lot to people in terms of love and emotional support. Simply petting a dog, cat, rabbit, or even horse can lower blood pressure and combat stress.

The feelings are reciprocal, since our touch can have therapeutic effects for our pets, especially if they feel bad.

The success of the film

“A Dog’s Journey” is a film with excellent photography and settings, most of the setting is done in places in the wild so the result of the lighting and camera games are simply very beautiful. The filmmakers take advantage of the landscape when they chronicle Bailey’s life as Ethan’s dog.

On the other hand, the generational count is also carried out correctly, seeing how many cultural stations pass before our eyes, referencing “How Deep is Your Love” or “Take on Me” to specify the chronological context in which we find ourselves. It is handled with great subtlety, but at the same time with great originality.

More about “A Dog’s Journey”: