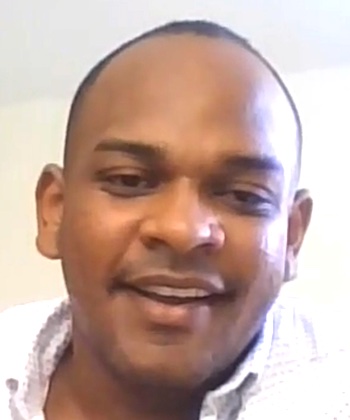 Mario: “Hello, I come from the Dominican Republic. My goosebump moment was when I first watched the movie “Corpse Bride” as an adult, right after my first big heartbreak. I watched the movie and I saw so much of myself in one of the main characters, because she was going through a similar situation. And I got really emotional. One of the things that touched me the most was the ending, when she finally let go of it, but at the same time she was able to set herself free, and to me it is one of the biggest life lessons I have ever learned and it was awesome. I really loved that movie, it really touched me.”

Tim Burton’s “Corpse Bride” is not the macabre horror story suggested by the title, but a sweet and visually charming tale of lost love. In an age when most animated films are relentlessly bright and colourful, this movie has skeletal characters, but they are all relatively cheerful nonetheless.

A true masterpiece that tells the story of a living man who is “married” to a dead woman. As long as there is this difference between Victor and the Corpse Bride, there is tension in their tenuous relationship. Their relationship clearly ends when the Corpse Bride “evaporates” into hundreds of lovely moths clearly allowing Victor to be happy with the woman he loves. The movie can be shown to children, as it is a movie where everything works out well, but not perfectly. It is an honest story to show that you can be happy and sad at the same time.

A new success for Burton

The film is based on a 19th century Russian-Jewish folktale, which Joe Ranft introduced to Burton while they were finishing “Nightmare Before Christmas”. The film began production in November 2003, while Burton was finishing “Big Fish”.

Tim knew where he wanted the film to go in terms of emotional tone and story points. His job was to work with the crew on a daily basis and get the material as close as possible to what he wanted.

Once the film was released, it received positive reviews from critics. The review aggregation website Rotten Tomatoes reported an 84% approval rating with an average rating of 7.24/10 based on 196 reviews. The site’s consensus reads, “As one might expect from a Tim Burton film, “Corpse Bride” is whimsically macabre, visually imaginative and emotionally bittersweet.”

Is it a happy ending?

Usually in a fairy tale like this, it’s pretty clear which woman the hero is “supposed” to marry in the end.

At the beginning of the film, it seems pretty straightforward: Victor meets Victoria, and the two are surprised at how much they like each other. The Corpse Bride seems like a monster when she first appears, but she quickly reveals herself to be funny and sweet. She’s rotten, but she’s not rotten.

As the story goes on, the Corpse Bride becomes more and more sympathetic. However, we never wanted to stray from what was unusual about the story: it’s a love triangle in a children’s movie, and you sort of root for all three characters.

Emily knows that Victor still loved Victoria and that their bond was one of a great friendship that made her realise that she had already done her part because Victor’s happiness was also her own and she knew she would be happy to be with her beloved. She also found out who really killed her because when she she died, those memories became blurred. Emily departs happily admitting that her mission in this world is over and leaves becoming beautiful blue butterflies that fly around the moon.

It’s a good ending because it’s a win-win and Emily gets to have peace. And Victor and Victoria are finally happy.

In an era when most animated films are relentlessly bright and colourful, “Corpse Bride” creates two palettes, and not the ones we expect.

The world of the living is a drab, overcast place, with most of the color drained away, and the remaining grays, purples and greens so muted as to seem apologetic. The world of the dead, on the other hand, is the place where one would want to spend one’s vacation. It is livelier, more cheerful and with more vivid colors.

To make Stop Motion, they used characters approximately 61 cm tall. The structures were large, so the film crew along with the animators could fit through the doors without much effort.

Both the puppets and the dolls that were used in the film did not have a mechanism to change expressions and movements, but they had a clockwork mechanism inside that had hidden keys to modify facial expressions.

Ian Mackinnon and Peter Sunders were in charge of creating the dolls and puppets. Both were able to achieve texture in the skin using silicone. They were the ones who impressed the director by creating the mechanism that allowed changing facial expressions and movements mentioned above.