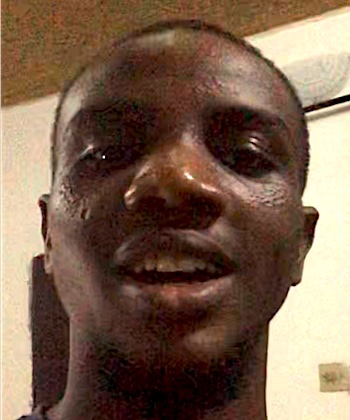 The movie “Don't look up”

“Hello, I am Victory and I from Guinea Bissau. My goosebump moment is during the movie “Don’t look up” starring Leonardo DiCaprio where he was seated at the table with his family, and the comet was about to hit the earth, and they were just having a wonderful time, reminiscing about good memories. It made me realize that we have a short time here on earth, and we can use this short time to do as much good as possible, to have a positive effect on the life of people and achieve as much as we would like to achieve. I think that was a very, it was a goosebump moment for me and yeah, that was it. Yeah!”

A story that gives you something to talk about

A world that ignores scientists and a technology guru who only thinks about making the most of misfortunes. With those members, Adam McKay’s “Don’t Look Up” arrived on Netflix on Christmas Eve. The platform bought it from Paramount in April 2020, just when its shooting had been postponed to November of that year due to the worldwide lockdown, and according to its data, last Tuesday it was already leading its service in 94 countries.

The plot of “Don’t Look Up” begins when an astronomer, Jennifer Lawrence, discovers a 9-kilometer-long comet whose course is headed directly towards Earth. Together with her professor and mentor (Leonardo DiCaprio), they warn NASA, and the space agency in turn warns the U.S. president, who is frightened at the time by a greater political threat: the mid-term elections that could change the majorities in the U.S. Congress and Senate.

There are only six months left to save the planet, and those in power do not seem to realize the urgency. The satire has become a topic of conversation in the networks: it was trending topic for four days.

“Don’t Look Up”, a possible similar event in reality?

“Don’t Look Up” is becoming one of the phenomena of the season, with a star-studded cast of Hollywood stars, a dark humor that hurts from how real it can become, for its worldwide distribution on Netflix and for its portrayal of a society that, on purpose or not, looks a lot like the one we have seen in the last two years of the Covid pandemic.

In the plot, two scientists try to warn humanity about a comet that will destroy Earth, but find a society divided by the informational dynamics of the media, pop culture and social networks.

The film gives us a fictional story about a nation distracted by pop culture and divided over whether to heed the serious warnings of scientists. Everything we know about news cycles, talk shows, social media, and politics.

“Don’t Look Up” has a couple of rather irresistible aces up its sleeve. The first is the cast that sustains the plot and the interest in its events. With Jennifer Lawrence as Kate Dibiasky and Leonardo DiCaprio as Randall Mindy alone, it draws a lot of viewers.

But it also has Meryl Streep, Cate Blanchett or Timothée Chalamet; and Jonah Hill, Mark Rylance or Ron Perlman.

This luxurious cast, fortunately, is not at the service of a script lacking in substance. That is because Adam McKay’s film is not only intended to make us laugh with its extravagant comedy, surreal and prurient in its social parody, full of recognizable details of our times.

In the satire he proposes, we find the obsession with the virtual environment and the superficial priorities versus those of real substance, the hollow professionalism of journalists in the media or the banality of politics.

Because his narrative purpose lies beyond them in “Don’t look up”. The acidity and the absolute lack of mercy with which he treats the behavior of most of the characters, Janie and Jason Orlean in the political environment, Brie Evantee (Cate Blanchett) and Jack Bremmer (Tyler Perry) in the press or the unspeakable Peter Isherwell in the business and technological, is of a corrosion that makes one uncomfortable; due to something more than the empathy he feels for the suffering Kate Dibiasky, Randall Mindy, and Teddy Oglethorpe.

More about “Don’t look up”: