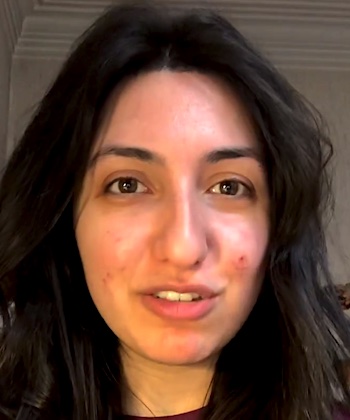 “Hello, I am Ana, I am from Georgia, and my goosebump moment was like a month ago when I went to see “Encanto” in the movies. And the thing is that when I saw the announcement of “Encanto”, I immediately wanted to go but it seemed like nobody wanted to go with me to see it. One day I just decided to go alone and I have never enjoyed a movie like that before. And the thing is that the whole movie is so inspirational. It makes you believe in humanity, and makes you believe in your own worth and everything. The sounds are amazing, I am a big music lover. Disney movies are my biggest, my biggest pleasure, and I enjoyed it so much. Most importantly, the last moment when Mirabel touches the doorknob and the whole “Casita” lightens up – oh my god. So, yeah, I am so excited to talk about this.”

A film based in Colombia

“Encanto”, the Disney movie that was released worldwide at the end of last November, contains a world of natural and cultural references to Colombia. And how could it not, if the story is set in the country?

The film is set in Colombia and focuses, in the purest style of magical realism, on the Madrigals, a family that lives in the mountains. All its members have special powers except Mirabel, a young girl, 15 years old, nice and wearing glasses, a detail that makes her the first Disney princess to wear them. Mirabel struggles to find her gift and save her family from a threat that can make magic disappear.

Magic has blessed them with unique gifts: modifying the weather, extreme strength, being able to heal, talking to animals and making plants grow and flourish.

The film, Disney’s 60th, portrays the coffee-growing landscapewith great verisimilitude, the country’s biodiversity -in fauna and flora-, its music, its gastronomy, its climates, and its costumes. The animation is a declaration of love from the Mickey Mouse studio to Colombia. Just as what happened with “Coco” in its time and its homage to Mexican culture, “Encanto” does the same with Colombia.

Throughout the film there are references to flowers, especially the orchid, which is the country’s national flower.

Likewise, “Encanto” is recreated in an area that reflects the Cocora Valley, a natural landscape located in the tourist area of the Eje Cafetero, stranded in the central mountain range of the Andes and is drawn by wax palms, another of Colombia’s national symbols.

Some animals that inhabit the country also appear, such as the jaguar; the capybara (capybara, capybara), the largest rodent in the world; the tapir, which lives in the Andean forests and moorlands; the toucan, or the hummingbird, as Colombia is the country with the most species of this bird.

The animated feature also pays tribute to Colombian Nobel Prize winner Gabriel García Márquez and, during the film, yellow butterflies are seen, for example, like the ones that chased “Mauricio Babilonia” to his grave in the book “One Hundred Years of Solitude”.

Colombia’s varied gastronomy is also portrayed with representations of arepas; coffee, the country’s most recognized beverage in the world; and achiras, a typical preparation from the departments of Huila and Tolima made from achira or sago starch, a plant of South American origin used by the pre-Hispanic peoples of Peru and Colombia.

The flowery white tableware of the municipality of Carmen de Viboral, in the department of Antioquia, is also part of the cultural charm of the country shown in the Disney movie.

Traditional costumes were not left out of the film either, as the characters wear Andean ruins, traditional hats from the Caribbean and the coffee region, and typical costumes such as that of Mirabel, the main character.

Other cultural references to which “Encanto” appeals are the accordion, the musical instrument that serves as the basis for vallenato, and the macetas, a handcrafted product made of sugar figures decorated with small pieces of paper and multicolored paper dolls typical of the department of Valle de Cauca.

In search of talent

Language and voices were two issues to which Disney attached great importance. The use of English in the film was one of the deepest internal debates the directors had, as they acknowledged, aware that Spanish-speaking audiences, particularly Colombian audiences, might disagree. That is why they included very Colombian sayings, phrases and words in the dialogues, as well as a range of accents from different regions of the country.

To finish giving life to the characters, the voices were missing, and the searches were exhaustive; and as we said at the beginning, in total secrecy.

After months of auditions, the Madrigal family had their complete personality. Stephanie Beatriz and Olga Lucía Vives lend their voices to Mirabel in English and Spanish, respectively; the great María Cecilia Botero is grandmother Alma; John Leguizamo (English) and Alejandro Riaño (Spanish) play Bruno; Mauro Castillo and Carolina Gaitán are Pepa and Félix; Angie Cepeda is Julieta; Diane Guerrero is Isabela; Wilmer Valderrama is Agustín, and singer Maluma is Mariano, among other artists. In addition to Vives, Sebastián Yatra performs another of the film’s songs, “Dos oruguitas”.

More about the movie “Encanto”: