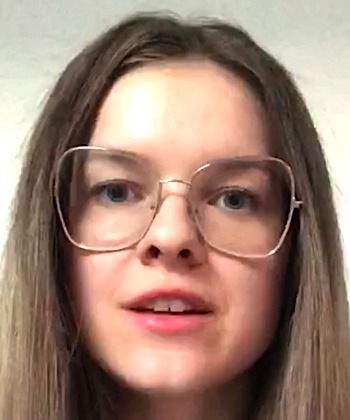 Dora: “Hello! I come from Hungary. My goosebump moment is from the movie “Howl’s Moving Castle” from Hayao Miyazaki. The scene when Howl wants to make Sophie happy, so he creates a new color on the castle’s door, leading to a beautiful destination from his childhood. As Sophie steps through the door, she becomes so happy that the curse momentarily lifts from her. She carelessly runs through the field, and at this moment she doesn’t even realize that Howl already knows about the curse and knows that she is not actually an old woman. This scene for me shows how pure their love is, and how much Howl really cares about Sophie, and I think it is a beautiful scene.”

One of Hayao Miyazaki’s most beautiful films

“Howl’s Moving Castle” is one of Studio Ghibli’s and Hayao Miyazaki’s best films. Shot just after “Spirited Away”, the film was nominated for an Oscar, a Golden Lion in Venice, an Annie Award and many, many other awards. It is one of the most beautiful and mysterious films of its author.

Unlike Miyazaki’s other films, “Howl’s Moving Castle” tells a more classical and accessible story for Western audiences, which is logical since it is based on the novel of the same name by British author Diana Wynne Jones. Still, it has many particularities and it is not always easy to unravel its multiple messages.

This 2004 film tells the story of Sophie, a young girl who is cursed with a horrible curse that gives her the appearance of an old woman. Sophie decides to ask for help from the wizard Howl, who lives in a traveling castle, but perhaps it is Howl who needs Sophie’s help.

The film deals with many themes, but one stands out above the rest: self-improvement through love and that the search for happiness is not without its difficulties. This is shown very well in the film.

But who is Sophie and what is the couple in love who star in the film like? Sophie is a young woman with a gray life who does what she must do, work in her family’s boring hat store, but that is not what she really wants. She is resigned to the fate that others have set for her. However, the curse she suffers, which turns her into an old woman, forces her to step out of her comfort zone and see that there is a whole world to discover.

The same happens with Howl, the other protagonist of the story, a selfish and egomaniacal magician who overcomes his childhood fears and traumas through love.

We can also not forget the third protagonist of the film: the walking castle with its wonderful design. The castle is a living character and that is how it was conceived by Miyazaki. The Japanese director put a lot of effort in making the castle a character and not a building of the scenery itself.

The mysteries of the film

Although it may seem to be a more accessible film because it is closer to the Western environment, it is tremendously cryptic in its messages and there is a lot to decipher in it.

Diana Wynne Jones, the author of the original novel, was delighted with the film, but acknowledged that it was not faithful to her novel. They are two must-see and must-read works, each in its own field. Perhaps some aspects of the film are best understood by reading the novel.