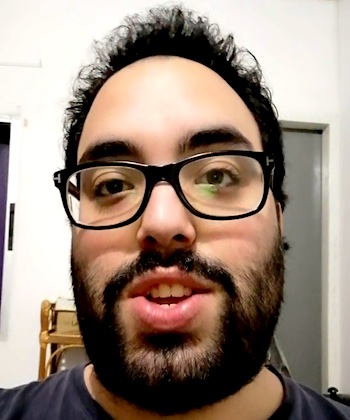 “Hi, my name is Luciano and I come from Uruguay. My goosebump moment is when the protagonists in “Summer Wars” are in the middle of the final battle scene. They are facing and challenging the virus that is destroying their society and their technology. Basically, they know they are almost certain to fail against this virus and so they become desperate. At that point, somebody else approaches, somebody that they do not know and somebody that they have never seen, just to give them hope and ultimately help them reach their goal. But it is not just one person, it is multiple people from around the world that are facing the same issue and at that moment I always shiver and cry because I realize, then and now, how powerful we can be as a society, to face our issues.”

“Summer Wars” is a Japanese animated science fiction and romantic comedy film released in 2009 and directed by Mamoru Hosoda. The film revolves around Kenji Koise, a seventeen-year-old Tokyo native with a reserved character, who is passionate about mathematics and computer science.

During his summer vacations, he decides to participate in the Mathematical Olympics, where he will not be able to pass the qualifying rounds. This causes him to enter a deep bitterness and decide to spend the rest of the summer connected to a virtual world called OZ as his escape valve.

However, his sorrows will be short-lived, as he will be invited, to his amazement, by the most popular girl in the institute, Natsuki Shinohara, to spend the rest of the holidays at her family’s home in a Nagano village. The reason for Natsuki’s sudden and surprising invitation to her family’s house is that this beautiful young woman promised her great-grandmother that for her 90th anniversary she would introduce her to her boyfriend, making Kenji impersonate him.

Natsuki’s great-grandmother, Sakae Shinohara, is an energetic old woman of great influence in government and financial circles in the area, representing the 16th generation of the Jinnai family. On the very night of Kenji’s arrival at the Shinohara family home, a series of mysterious symbols showed up via email on his laptop that he will immediately try to decipher.

The next day, the world will appear to have changed radically, and under the command of Natsuki’s great-grandmother, Kenji and all members of the Shinohara family will come together to face this most unique crisis.

In addition, the technical section of the film is very remarkable, with impressive character and scenery design and smooth and effective animation, but it is in the script where the film really shines.

The story captures the viewer, the characters are credible and close with each other, their rhythm ensures entertainment and the movie’s ending is magnificent, closing and linking the two plots perfectly. According to Mamoru Hosoda, his intention in making the film was that he wanted to tell a story that could be accepted by a very wide range of people, regardless of their age or gender.

The movie has certainly passed the test, also creating a remarkable, funny and, at times, moving film. In the midst of virtual battles, imaginary worlds, personalized avatars, visual and aesthetic perfection in an almost perfect social network, Hosoda sets his gaze on the board games that keep the family together, on jokes and gestures of union, on those details that end up forming a person and building their ideals, as well as their memories.

The director insists on wanting to remember that the important thing in this technified universe must continue to be its people, and not the technology itself. Hosada still has a lot to say, and he is still one of the most promising directors of Japanese animation today. It is true that the main idea of the plot is not new, but the way it develops it, mixing the terrestrial present of today nowadays with the familiar Japanese traditions, showing us two worlds which would have to be different, but in which in the end the feelings of the real world are transferred to the fictional one. It is admirable.

Finally, animation and drawings, within their creative and artistic simplicity, show a wide range of personalities, each with their gifts and their own graces, which make them attractive to the viewer. At the same time it is made into an ingenious animated film.

What does “Summer Wars” teach us?

History makes a very intelligent criticism of the dependence that we currently have on the Internet, where social networks have become one more space in which to develop, and any collapse in the virtual system will be reflected in a collapse of the real social system. In addition, “Summer Wars” presents us with the disappearance of that border that allows us to differentiate between the real and the virtual world, since it is currently very difficult to separate our daily lives from our relationships on the Internet.

In addition to the technological aspect, its avatars and gadgets, “Summer Wars” presents us with a very endearing family construction, since the structure of the Jinnai Family, in addition to being cute, is very realistic, especially in the role that women play as head of the family. Not only that, the film also shows us how problems, secrets and conflicts can be overcome through family unity, a union that is often only achieved when families suffer a tragedy.