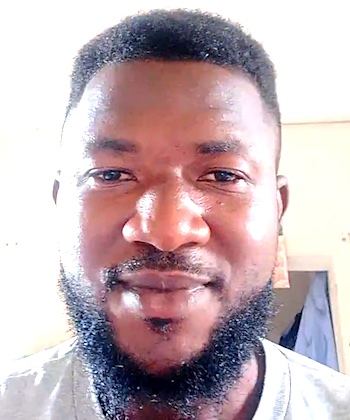 Odeh: “Hi, I am from Togo. My goosebump moment was from a movie titled “Sweet Girl”, about a man and his daughter who lost his wife to cancer after being offered a glint of hope in the form of an affordable drug called Spero. The dream fades as pharmaceutical giant Bioprime halts the drug’s release indefinitely. While the husband, Ray Cooper, tried to uncover the conspiracy behind this, he was called by Bioprime. His daughter, Rachel, vowed to take vengeance on Bioprime and uncover their evil secrets, she lived a life without both parents. This gave me goosebumps because I know what it means to live a life without a father or a mother. I lost my dad at a very tender age, and I know the impact this has on me. Rachel lived through all of that with the pains of having no parents. But at last, she brought Bioprime to justice, uncovering their dirty secrets, for killing her dad and letting her cancer mother die.”

In search of justice

“Sweet Girl”, an action movie from streaming platform Netflix, released last August 20th, revolves around a man who vows to get justice and avenge his wife’s death while protecting his daughter.

“Sweet Girl” begins with the death in a hospital of Amanda, who is Ray’s wife and Rachel’s mother. However, the lives of Ray, played by Jason Momoa, and Rachel, played by Isabela Merced, change completely when they discover that a treatment that could have cured Amanda’s cancer could not be used because of a sinister pharmaceutical and political conspiracy, which will lead them to seek justice on their own.

A mix of action and fatherly air

Jason Momoa is the main image of “Sweet Girl”, the most recent movie of the famous Khal Drogo from “Game of Thrones”. However, as he has said in some interviews, “the story is about courage and what you can do for family”.

He is not lying, but you only must watch a little bit of the production to know that not every father fights a hitman on the subway and not everyone has the potential to go head-on against a pharmaceutical company, being an ordinary father who must work double shifts to deal with the drama of having his wife hospitalized for an aggressive cancer.

That’s the trigger for this Netflix action-hybrid that fits an unexpected family connection between a father and daughter who seek justice but have several dangerous obstacles when they decide to take on that challenge.

Jason Momoa repeats the formula of being a stylishly rugged hunk who isn’t afraid to show his feelings. Sometimes he struggles between so much brute strength and gladiator presence, but he was able to win the love of the queen of dragons in Game of Thrones and go from being a brusque and abusive monarch to becoming an adored character, which led many to cry when he had his date with death.

A story with which to identify

What happens at the beginning of the story is certainly challenging for the actors, as Jason says of the scene in which Cooper has to say goodbye to his wife, Amanda: “I went to places I’d never been before. I hadn’t experienced too many people dying before”.

Being part of a close-knit family, it was easy for the actor to use his personal experience to fuel his character and relationship with Rachel. “When I first read the script, it really struck me. Being a father, I always like to think if this could happen to me, if I could be in this situation. Because I’ve been in a lot of situations where things like this could happen and then I think, what would I do? And how would I feel about it? And what would I do with my own hands?”

That same family experience also helped Momoa to easily bond with co-star Isabela Merced. “She feels like my daughter. We had a great connection. I look at her like she’s family. We really hit it off and connected. She’s funny and has a beautiful sense of humor. She will do wonderful things in this world”.

More about the movie “Sweet Girl”: