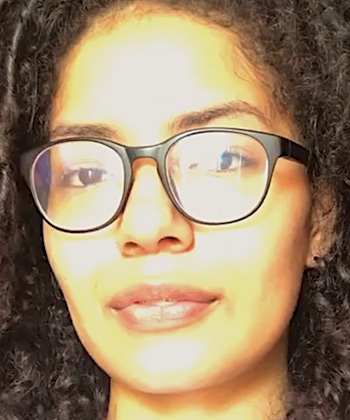 "The Pursuit of Happyness"

The movie “The pursuit of happyness – Valeria’s goosebump moment

“I am Valeria and I come from St Cristobal and Nieves. My goosebump moment was when I saw the movie “The Pursuit of Happyness” for the first time. I think it is really beautiful because it shows the importance of believing in yourself, even when all things are going bad. At the same time I remember the last scene when Will Smith is walking around a lot of people in New York, and he finally finds his own happiness and his true self. That part always gets me, you cried and smiled, because as humans we all have dreams and goals, and we are chasing so much for something that we sacrifice a lot of things in our lives. This movie is an inspiration for dreamers, and although they may not come true yet, I think we should continue walking in the search of finding ourselves.”

“The Pursuit of Happyness” is an inspirational film based on the true story of now billionaire Chris Gardner, who struggled for a year with homelessness while raising his son alone and working to get a full-time job. This film shows us just how far a father will go for his children. What makes it even more emotionally captivating is that Chris Gardner and his son, little Chris, are played by a real-life father and son, Will and Jaden Smith.

Without a doubt, this is one of Will Smith’s best performances, proving that he can display many more registers than action movies have allowed him to. To play Chris Gardner Jr. they chose Jaden Smith, Will Smith’s son, in his first screen appearance, who gave a very correct performance. The real Chris Gardner makes a cameo at the end of the film, when after picking up the child at daycare, the two are walking down the street telling jokes and cross paths with a man in a suit who smiles at them.

Steven Conrad’s screenplay is based on a memoir written by Chris Gardner and Quincy Troupe, which soon became a bestseller, and although the adaptation is faithful, there are several differences with the real story. The result is an honest film that shows failures and missed opportunities, but also how the American dream is possible with struggle and sacrifice, which has made it a modern classic.

The lessons that the movie leaves us

In the search for ideas, situations or problem solving we usually look for movies that transmit the same ideas or feelings that we have at that moment and support us to be able to see your problems or concerns reflected in others.

One of those movies is the one starring Will Smith, “The Pursuit of Happyness”, which tries to give values such as self-improvement, patience, knowing how to value oneself, not to fall or get depressed. The story, based on the life journey of Chris Gardner, is aimed at encouraging people.

It is necessary to know and recognize other situations analogous to yours in other characters, be it a well-known or anonymous person, where you can identify your gifts and strengths and absorb the inspiration they transmit. In the business world or during a stage of self-improvement, there has always been someone who has been a pioneer, known or unknown, in what you are looking for. Use them as a guide and draw parallels so that you can support yourself and move forward.

During your life, in all areas, you will meet frustrated, bitter, and self-conscious people, and they will try to make you believe that you are just like them, with no future and not capable of anything. They see everything wrong or choose ignorance, but the film teaches that everything good and bad that happens to you will depend on you, no one will come to help you. It is from the falls and mistakes you make on your own that you learn the most.

Keep your thoughts focused on those things that allowed you to achieve goals in the past. Believe in yourself and in the ingenuity to get resources from around you. Thus, Chris Gardner teaches us that if you become aware of everything you have around you, and add it to the knowledge, skills, and talent you possess, you can really do whatever you want, whatever you dream of.

Chris became homeless in the early days, but that didn’t stop him from progressing and becoming rich (and not just in money). But what Chris is trying to tell us with the reflection of his life is to discern between what is important and what is accessory, to learn to prioritize. If we would think about what we really need, leaving aside what we think or what we are made to need, we would not only live with less, but we would learn to value what is truly important.

The story of the man who became a multi-millionaire investor

Back in the days when Chris Gardner and his young son slept on a public restroom floor, he could never have imagined that his life story would become a Hollywood blockbuster.

It was the early 1980s when Gardner, then 27, and his child were homeless for a year in San Francisco, California. Employed at minimum wage in a training program at a brokerage firm, he didn’t have enough money to pay the rental deposit on an apartment.

So, Gardner, who was separated from his partner, and his son Chris Jr. slept wherever they could. In addition to a bathroom in a train station, they found places to sleep in parks, church shelters or under office desks after everyone had gone home.

They fed at soup kitchens and what little money he had, he used to pay for a daycare center to care for his son while he went to work. Despite the adversity, Gardner thrived in his work. He had an instinct for selling assets and, at the end of his training period, his firm, Dean Witter Reynolds (DWR), gave him a full-time job.

Already with the means to lease a house for himself and his son, his career quickly ascended to unimaginable heights and, in 1987, he opened his own investment company, Gardner Rich. Today, Gardner has a fortune estimated at US$60 million, travels the world giving motivational talks and sponsors several charities for the homeless and against violence against women.

The fact that Gardner had a very difficult childhood and was in jail shortly before his internship at DWR may explain why Hollywood became interested in his best-selling autobiography “The Pursuit of Happyness”. The film of the same name was released in 2006, starring Will Smith, who received a Best Actor Oscar nomination for his portrayal of Gardner.

Gardner was born in Milwaukee, Wisconsin, and never knew his father. He was raised in poverty by his mother Bettye Jean and an alcoholic stepfather who physically abused him. He also spent a period in foster care after his mother, in a fit of desperation, attempted to kill her partner. Despite the hardships of his childhood, Gardner said his mother was an inspiration.

More about the movie “The Pursuit of Happyness”: