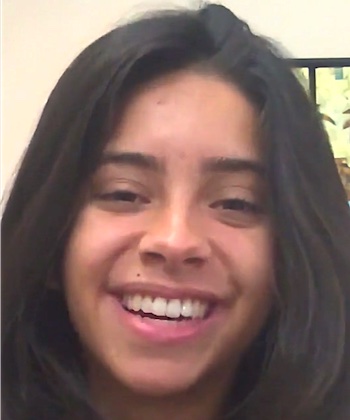 “Hello, my name is Andrea and I am from Puerto Rico. My favorite goosebump moment was dancing Ballet at New York City in the Lincoln Center theater. The Nutcracker is certainly one of the most famous and magical classical ballets in the whole history, especially because it holds Tchaikovsky’s music, and his music is totally wonderful and magical. I remember listening to Tchaikovsky’s Waltz of the Snowflakes as I was dancing, and it certainly feels like you had snowflakes kissing your skin the minute that you start listening and that you start moving through the dance. Also, there are like fake snowflakes falling from the theater as you are dancing which makes it more magical. But, the fact that it was also snowing outside before the performance, and everyone was drinking hot cocoa, creates this sense of preparation and excitement before getting on stage. And after getting on stage having this union from all the dancers and having some onion soup and spending some time together was like really what The Nutcracker is about, which is about sharing this Christmas time amongst family and friends.”

The Nutcracker by Tchaikovsky

The Nutcracker is a tale-ballet structured in two acts, created by Pyotr Ilich Tchaikovsky, that premiered in September 1892 at the Mariinsky Theater in St. Petersburg.

Some fifty years after the premiere, Walt Disney used musical parts of The Nutcracker in his 1940 film Fantasia. People liked the film and became interested in the ballet. Interest grew when George Balanchine’s staging of The Nutcracker was televised in the late 1950s. The ballet has been performed in many different places since then and has become perhaps the most popular of all ballets in Western countries, mainly performed at Christmas.

The story behind The Nutcracker

In the original production the choreography was created by Marius Petipa and Lev Ivanov. The libretto was written by Ivan Vsevolozhsky and Petipa himself, based on Alexander Dumas’ (father) adaptation of Ernst Theodor Amadeus Hoffmann’s story The Nutcracker and the Mouse King.

The starting point of The Nutcracker is the Christmas party organized by the magician Drosselmeyer, a crazy old man, inventor of toys and friend of children, to offer them countless surprises. But the main character Clara’s favorite toy is the Nutcracker. This one, in her dreams, will become a brave character, ready to defeat the terrible mice that fill her room, led by a dangerous king.

Before its premiere Tchaikovsky selected eight of the ballet’s numbers to form The Nutcracker Suite op. 71a, conceived to be played in concert. The suite was performed under the composer’s direction on March 19, 1892, on a meeting of the Musical Society section in St. Petersburg.

The suite has been popular from then on, although the complete ballet did not achieve its great popularity until the 1960s. The music of this ballet is known, among other things, for its use of the celesta, an instrument the composer had already employed in his symphonic ballad The Voivode of 1891. It is the solo instrument in the Dance of the Sugar Fairy, but also appears in other parts of the second act.

How did The Nutcracker become so famous?

The story of Clara and her nutcracker has become so popular by today that it’s hard to imagine going through the month of December without it. In fact, it is so common to see posters of this ballet performance in theaters in any city that they are practically part of the Christmas decorations.

But the truth is that The Nutcracker is a ballet that has little to do with the typical religious traditions of the Christmas holidays and does not even mention the baby Jesus. In fact, if we take the Christmas tree off the stage, it could practically be detached from Christmas.

The presence of The Nutcracker in the Disney hit Fantasia caused audiences to become more interested in the ballet and the work was brought back into consideration. In fact, in 1944, the first presentation of this ballet was made for the first time in the United States, which was premiered by the San Francisco Ballet.

In addition to Disney, another important character in the popularization of the ballet was the American choreographer George Balanchine, who in 1954 made a new version of The Nutcracker for the New York City Ballet, which reached true popularity in the 60s, to the point that it became a Christmas classic in the country.

Today, The Nutcracker is incredibly important to any reputable ballet company, as its popularity represents a huge part of the company’s revenue. In fact, the San Francisco Ballet earns about 40% of the company’s ticket revenue each year from the performance of The Nutcracker, according to dance critic Lauren Gallagher.

The ballet is so famous that the purchase of a nutcracker, which belongs to typical German folklore, is now part of the usual Christmas decorations in the United States and around the world.

More about The Nutcracker:

One Comments "The Nutcracker, a magical classical ballet"