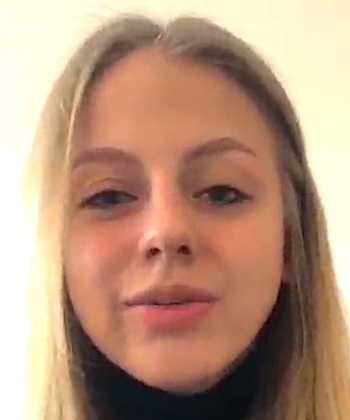 The passion for dancing

Diana: “Hello. I am from the Republic of Belarus. I get goosebumps when I dance or see a very beautiful choreography that excites me a lot. In particular, when I dance, it is as if I am in a completely different world where everything is calm and there are no problems, just you and your world. When I watch the movie “Step Up”, in which every dance production has so much feeling and energy, it allows me to set a goal or a dream for something like this to happen to me. Such a story makes you realize that everything in life can be passed and overcome, in spite of all the difficulties. The main thing is to be strong and believe in what you truly love and do.”

The exciting world of dance

Dance is a universal language that exists in all cultures. Dancing awakens emotions and fantasies through movement, which facilitates the expression of sensations, emotions, feelings and moods in a natural and uninhibited way. In addition, it is a form of creative expression which helps to connect with oneself, enhancing and encouraging spontaneity and creativity within us.

If we are talking about awakening emotions through dance, one of the productions that gives more than one of us goosebumps are the “Step Up” movies. Full of explosive dances and romance, it shows us a group of young and sensual performers who take to the streets to do what they do best: dance.

The story behind “Step Up”

He is a daring rebel from the wrong side of the tracks in Baltimore. She’s a privileged dancer from a select performing arts school. Their worlds couldn’t be more different, but when their fates collide, sparks fly between them, igniting an exhilarating hip-hop-fueled fairy tale about making your one shot at an improbable dream come true.

Tyler Gage (Channing Tatum) has grown up and spent his entire life in Baltimore City’s most dangerous neighborhoods and knows it’s unlikely he’ll ever get out. But after a brush with the law, after which Tyler must do community service work at the Maryland School of the Arts, everything changes.

That’s when he meets Nora (Jenna Dewan) the school’s prima ballerina, an attractive diva who is desperately looking for someone to replace her partner, out on accidental leave, before the school’s all-important Senior Showcase. Spying Tyler’s moves, Nora can’t help but notice that he has a natural, unpolished talent.

She decides to take a chance on Tyler, but when they begin training, the tension between them and their very opposite backgrounds combusts. The only thing separating Tyler from the void is his dreams of getting off the streets and the only thing standing in the way of Nora’s obviously bright future is the Senior Exhibition. Now, with so much at stake, Tyler will have only one performance to prove to Nora and himself that he can ascend to a life far better than he ever imagined.

Dancing helps to establish relationships with other people, and it has been proven that maintaining good emotional ties and socializing with people contributes to increase self-esteem and positive attitudes towards oneself and others.

Attending dance classes is an excellent method to overcome shyness by helping people to overcome their fear of “ridicule” since, for example, a fall while dancing is a typical failure that all dancers have had at some time and is not seen by them as something to be ashamed of.

Another way which also helps to improve self-confidence, is that every time someone gets to master a new dance step, the person experiences an increase in confidence and considers this fact as an achievement. Each positive achievement positively reinforces the self-concept, transferring self-confidence to other aspects of life.

More about the passion of dancing through the movie “Step Up”: