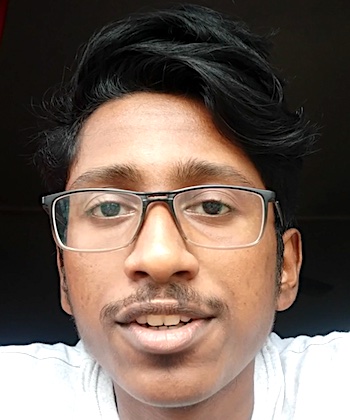 The scale of the universe

The scale of the universe – Ashwin’s goosebump moment

“Hello! I come from India. My goosebump moment is about the time when I truly realized the scale of the universe. So, one day in school my teacher was talking about stars and planets and how big they are compared to the earth. That day, as soon as I reached home, out of curiosity I searched about the largest things in the world on YouTube. I got to know about the gigantic stars and galaxies out there which are millions of times larger than the earth. I found out about the existence of black holes and how incredible they are, massive than billions of stars like our sun put together. It’s actually mind boggling that one cannot really comprehend the true scale of the universe no matter how hard they try.”

More enormous than we imagine

Our galaxy is only one among hundreds of billions of galaxies. To give us an idea, for every grain of sand on Earth, there are a million stars, or more, that can be recognized in the sky; however, there are some that, because of their size, are considered the largest.

Stars are giant spheres of gass that shine in the darkness of space. During clear nights we can see thousands and thousands of stars in the sky. The stars, together with the other celestial bodies in the sky and the space between them form the Universe. Stars shine because they produce reactions that release immense amounts of energy, and this energy emits light.

Galaxies are groups formed by millions of stars that come closer to each other thanks to the action of gravity.

The galaxy where the Earth is in is called the Milky Way and in it is the solar system which is where our planet is located. In the Milky Way there are more than 100,000 stars including the most important star for us, the Sun.

The biggest star in the universe

The Sun is gigantic, there is no doubt about it. It accounts for more than 99 percent of all the mass in the Solar System, which explains its absolute dominance over everything else. However, we also understand that the Sun may be a true dwarf compared to other stars, hypergiants that develop thousands of times its radius. That brings us to an inevitable question: what is the largest star in the universe?

When a star begins to deplete its supply of hydrogen, its core contracts, becoming denser and hotter. This breaks the star’s equilibrium, defeating gravity and causing the star’s outer layers to expand. That is the fate that awaits our own Sun, with an expansion that will cover the orbit of Venus, and probably the orbit of Earth.

But hypergiants are on a completely different scale. They are so large that they tear themselves apart and lose mass to stellar winds. One of the most studied hypergiants is Rho Cassiopeiae, so bright that it can be detected with the naked eye, despite the 10,000 light-years that separate us from it. Its radius is between 450 and 500 times larger than that of the Sun, but it has only 40 solar masses.

Size of the visible universe

The limit of the universe visible from Earth is 46.5 billion light-years in all directions. That is a diameter of 93 billion light years. One light year is 9.46 trillion kilometers.

The calculation is enormous, and yet this is only the part of the universe that we can see. After the Big Bang, the Universe expanded so rapidly that some of its light has not yet reached us, and so we cannot see it.

But if the Universe is only 13.8 billion years old, how can there be objects farther away? Is it possible that they have moved away faster than the speed of light? The answer is the inflation of the Universe.

More about the scale of the universe: