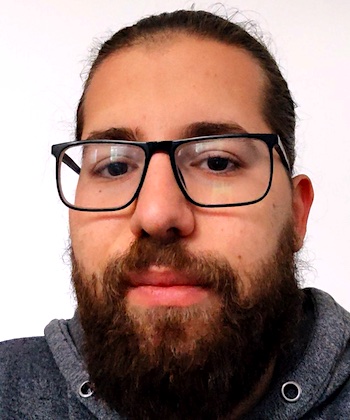 “Hello! My name is Lazar and I come from Montenegro. My goosebump moment is the sound barrier being broken by basketball fans in the Belgrade Arena. So, it was Euroleague, and I was going to my first big basketball game as a fan. In Europe, things can get a bit heated up. So, we entered the Arena, and everything was already full of energy. The game did not even start, and the fans were cheering, they were shouting, they were singing, and then the players came in. When the players come in, in Europe, there is a Euroleague anthem. Everybody was so loud, that you could not hear the anthem. There is a YouTube video, and that’s officially the sound barrier being broken. You can imagine being in the stands where everybody is shouting, screaming, jumping and it is so loud you cannot even hear the anthem from the speakers of the arena!”

The enthusiasm of the Red Star fans

In a match anything can happen. A sample of this was an incredible event that occurred in 2016, at the Kombank Arena in Belgrade when minutes before the start of a match of the Red Star team of that country, the Serbian fans showed why this pavilion is considered a real hell.

With chants, jumps and excitement, the local fans, called Delije, broke the sound barrier, making this an amazing event that gave more than one person goosebumps.

Delije is an ultra-group that supports Red Star Belgrade in all its sporting facets, especially in soccer and basketball. The name is derived from the Serbian word delija, meaning ‘brave’, ‘hero’. Their main rivals are Partizan’s Grobari and Dinamo Zagreb’s Bad Blue Boys, who are also two of Red Star’s great sporting rivals.

The name Delije began to be used by diehard Red Star fans during the late 1980s, with the official inauguration occurring on January 7, 1989. Up to that point, as many as eight groups shared the north stand of the Red Star Stadium (colloquially known as Marakana), a place that has been occupied by the Delije ever since.

Since its foundation in 1945, Red Star immediately became the dominant club in Yugoslav basketball. During its first decade of history, i.e. from 1946 to 1955, Red Star won 10 consecutive league titles.

The red-and-white club had to wait until 1972 to lift its next league title. After 1993, with the dissolution of the Federal Republic of Yugoslavia and under the Serbian flag, Red Star became league champions three more times, in 1993, 1994 and 1998, to make a total of 15 league championships in its trophy cabinet. A national record that is completed with 6 Cup titles, while in the Adriatic League, which is made up of the best teams of the former Yugoslav republics, they were runners-up last season.

In the most recent history and after being in the shadow of the successes of the neighboring Belgrade team Partizan, Red Star has been laying solid foundations in recent seasons that have allowed it to grow to become an important reference in Serbian and continental basketball again. Last season it returned to the Euroleague after more than a decade playing other European competitions.

What is the sound barrier?

Sound is a wave, and its speed depends on the density of the medium in which it moves and its temperature. It can go through air, water, or solid objects.

Sound through water vapor or ice is not the same, so, as we have seen, it is also influenced by temperature.

Through air and at room temperature (about 20 degrees Celsius) the speed of sound is 343 meters per second. About 1,235 kilometers per hour).

The sound barrier being broken in history

People began talking about it at the end of World War II. It was posed as a physical limit to speed in the arms race. With the development of supersonic aircraft, the speed of 1,235 kilometers per hour was broken.

The first aircraft to break through the sound barrier was the Bell X-1 flown by Charles Elwood in 1947. Before the successful outcome was reached, 18 pilots died. This is the sad cost of the struggle for breakthroughs in science.

Why does it sound so thunderous when the barrier is broken? Air, when compressed and expanded, generates a shock wave that is perceived as sound.

We may think that breaking the sound barrier is reserved for Concorde-type aircraft or $20 million jets, but the fact is that we can experience the sonic boom in our own homes: in fact, we’ve probably seen it before, without realizing it.

The whip was the first man-made object to break the sound barrier. Scientists around 1900 wondered about the cause of the sound. 20 years later, through high-speed photography, it was revealed that it was indeed a sonic boom.

Although usually remembered in contexts of circus trainers, cattle, or tamers, they are also closely related to popular culture icons such as Indiana Jones, Zorro or Simon Belmont from Castlevania.